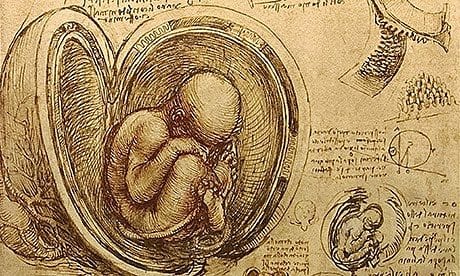 Greatest works of art ever

Leonardo expresses the human condition in a nutshell – indeed, his rendition of the womb resembles an opened horsechestnut casing. Inside is the beginning of us all laid bare. Five hundred years ago, this artist and scientist could portray the human mystery with a wonder that is not religious but biological he holds up humanity as a fact of nature. It is for me the most beautiful work of art in the world.
• Royal Collection, Windsor Castle

Leonardo expresses the human condition in a nutshell – indeed, his rendition of the womb resembles an opened horsechestnut casing. Inside is the beginning of us all laid bare. Five hundred years ago, this artist and scientist could portray the human mystery with a wonder that is not religious but biological he holds up humanity as a fact of nature. It is for me the most beautiful work of art in the world.
• Royal Collection, Windsor Castle

Caravaggio – The Beheading of Saint John the Baptist (1608)

Caravaggio shows a murderous moment in a prison yard. The executioner has drawn a knife to sever the last tendons and skin of John the Baptist’s neck. Someone watches this horrific moment from a barred window. All around is sepulchral gloom. Death and human cruelty are laid bare by this masterpiece, as its scale and shadow daunt and possess the mind.
• St John’s Co-Cathedral, Valletta, Malta

You are not looking at Rembrandt. He is looking at you. The authority of genius and age gaze out of this autumnal masterpiece with a moral scrutiny that is terrifying. Rembrandt seems to see into the beholder’s soul and perceive every failing. He is like God. He is the most serious artist of all, because he makes everyone who stands before him a supplicant in the court of truth.
• Kenwood House, London

Who painted these exquisitely lifelike portraits of animals? There was no such thing as writing in the ice age so nothing is known of the names, if they had names, of these early people. Cave artists may have been women; they may have been children. What is known is that Homo sapiens, our species of human, makes its mark with these paintings that are as beautiful and intelligent as anything created since.
• Chauvet-Pont-d’Arc Cave, Ardèche, France

The art of Jackson Pollock is a modern mystery. How, from flinging paint on a canvas laid on the ground, did he create such beauty and inner structure? Like a solo by Charlie Parker or Jimi Hendrix, his freeform improvisations loop and lurch and yet achieve a profound unity. Pollock only held this together for a short period of brilliance. This painting is a cathedral of the mind.
• MoMA, New York

The king and queen stand where you are standing, in front of a gathering of courtiers. Velazquez looks from the portrait he is painting of the royal couple. The infanta and her retinue of maids (meninas) and dwarf entertainers are gathered before the monarch. In the distance, a minister or messenger is at the door. In a bright mirror, the royal reflection glows. This painting is a many-layered model of the world’s strangeness.
• Prado, Madrid

When Picasso started to paint his protest at the bombing of Guernica, the ancient Basque capital, by Hitler’s air force on behalf of Franco in the Spanish Civil War, he was at the height of his powers. Thirty years after painting his subversive modernist grenade of a picture Les Demoiselles d’Avignon, his cubist intelligence was now enriched by the mythology and poetry unleashed by the surrealist movement. He also looked back to such historical paintings as Raphael’s Fire in the Borgo as he set down the greatest human statement of the 20th century.
• Reina Sofia, Madrid

Michelangelo’s Prisoners, or Slaves, were begun for the tomb of Pope Julius II but never finished. In its entirety – including the Dying and Rebellious Slaves in the Louvre and the statue of Moses on the final, reduced version of the tomb eventually erected in Rome – this constitutes the greatest unfinished masterpiece in the world. Yet Michelangelo did not leave things unfinished out of laziness. It is an aesthetic choice. The tragic power of these prisoners as they struggle to emerge out of raw stone is an expression of the human condition that equals Shakespeare’s Hamlet.
• Accademia Gallery, Florence

The long marble frieze, colossal broken statues of reclining gods, and frenzied carvings of centaurs fighting humans that Lord Elgin removed from the Athenian Acropolis two centuries ago are best known today as objects of controversy – which is sad, because we should be marvelling at their genius. Most of the best ancient Greek sculpture is only known through Roman copies. This is the greatest assembly anywhere of the real thing: the very art that created the idea of the “classic”. Gaze on the lowing heifer that inspired Keats’s Ode on a Grecian Urn and the goddesses whose robes uncannily resemble pictures by Leonardo da Vinci. Artistically, beyond the squabbles, it doesn’t get better than this.
• British Museum, London

The broken vision of Cezanne is a glittering array of glimpses and hesitations and reconsiderations. The intensity of his gaze and the severity of his mind as he attempts to see and somehow grasp the essence of the mountain before him is one of the most moving and revelatory struggles in the history of art. Out of it, very quickly, came cubism and abstraction. But even if Cezanne’s researches had led nowhere, they would put him among the greatest artists.
• Philadelphia Museum of Art 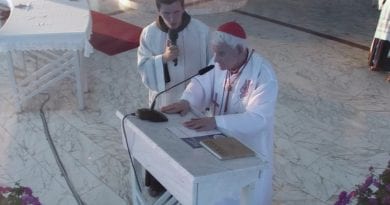 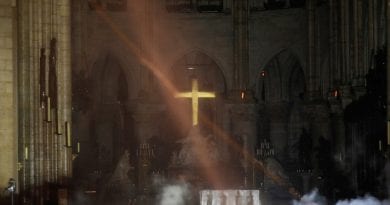 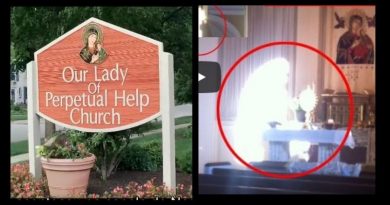 Message given to Ivan on 19th June …………. “Dear children you are all important to me. Pray and rejoice with