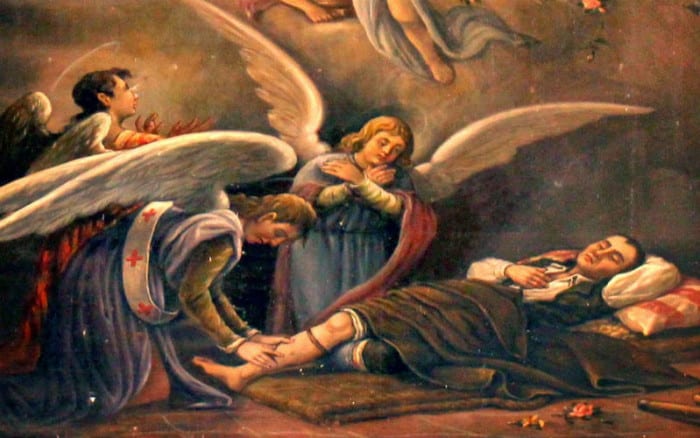 “However, the miracle happened after he had returned home to live with his parents. One night, after he had entrusted himself to the Virgin, he fell asleep, but he was woken by his parents who for first had noticed what appeared to be two feet poking out from the end of the bed. What an incredible surprise for them all: Miguel had two legs again! Not only, for his wasn’t just a new leg, but was the very same leg that had been amputated two and a half years previously, bearing the scars of old wounds including the surgical removal of a cyst.”

“You haven’t heard of Nuestra Señora Del Pilar!?    But she’s the Patron of all Hispanic Peoples! .. So, tomorrow we shall take you there.” It was during my visit to Madrid at the beginning of spring that I thus came to know of this story which is both fascinating and important. It is important because the shrine came to be after an apparition of Mary 40 years after Christ’s death (40 AD), that is, while she was still alive. 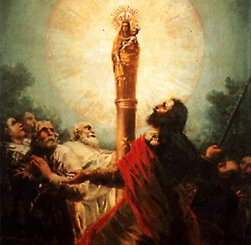 Tradition has it that St. James the Greater (son of Zebedee, brother of John, senior in age to James, the brother (read cousin) of the Lord) was in Caesarea Augusta (present-day Saragossa) evangelizing, but the Apostle was feeling disheartened by the failure of his mission and was about to return to Palestine when one night, on the banks of the river Ebro whilst in deep prayer, he received a visitation by the Virgin Mary. She appeared before him in body and soul, being carried by Angels on a column/pillar.

The apostle built the first chapel of what was to become one of the most important Marian Shrines in the world: the Basilica/ Cathedral of the Pilar (pillar). What has a pillar got to do with it? This also was carried to Saragossa by the Angels. The Blessed Virgin stood on top of it and asked the Angels to allocate it, thus indicating to James (known as Santiago: Sant Iago = Saint James) where he should build the temple. Mary was taken back by the Angels. One of them, however, by divine will was to remain as custodian of the holy location from which copious graces began to ﬂ ow. The pillar remained in place as proof of her visitation and as a pledge of her protection over Spain.

For centuries, rivers of pilgrims have continued to visit the Shrine of Saragossa. Many have desired kissing the alabaster pillar used as a base for the image of the Blessed Virgin. The value is not in the object; it is the faith with which one approaches it that makes it precous.

In November of 1987 John Paul II was extremely happy to make a pilgrimage to the land of Spain where he was much loved. In particular his pilgrimage took him to the Basilica of Saragossa. On that occasion he said: “Today I have fulfilled my desire to kneel, as a devoted son of Mary, before her holy pillar… The Christians of Spain have seen in this pilar a clear analogy with the pillar that guides the journeying of the people of Israel towards the promised Land (cf. Nm 14:14), that accompanies the new Israel, the Church, in her pilgrimage towards the promised Land, Christ the Lord. Our Lady of the Pillar is a radiant beacon… The Pilar is considered a symbol of the Spaniard’s strong faith, and is also an indication of the journey that leads to knowledge of Christ through apostolic predication.”

The feast day of Our Lady of Pilar is 12 October, a national feast day called hispanidad day (also known as Columbus Day) celebrated by Hispanics the world round. Under the Catholic King of Aragon and his wife Isabella, devotion to Our Lady of the Pillar took on national importance; and Christopher Columbus, in his travels, spread the devotion to other lands. We know, in fact, that one of his ships was named Santa Maria; and in a surprising coincidence, the date he discovered America was precisely the feast day of the Pilar: 12 October.

In 1640, 19 year old Miguel Juan Pellicer fell off the cart he was driving, and the wheel ran over his right leg beneath the knee. The wound was such that it was necessary to amputate the leg. The young man, a devotee of the Virgen of Pilar, had entrusted himself to her intercession, and after the operation, had remained a certain period of time at the shrine to beg for alms, given that he was no longer able to work and did not want to go home to be a burden on his poor parents at Calanda. Whilst here, he used the oil from the votive lamps of the shrine – when this was changed – to rub on his wounds, even though the doctor had advised against it.

However, the miracle happened after he had returned home to live with his parents. One night, after he had entrusted himself to the Virgin, he fell asleep, but he was woken by his parents who for first had noticed what appeared to be two feet poking out from the end of the bed. What an incredible surprise for them all: Miguel had two legs again! Not only, for his wasn’t just a new leg, but was the very same leg that had been amputated two and a half years previously, bearing the scars of old wounds including the surgical removal of a cyst. The case had obviously stirred up a lot of attention, and a board, which was set up to study it, asked that the amputated leg which had been buried in the cemetery of the hospital be exhumed, however, the leg was no longer there.

News of the great miracle quickly spread throughout Spain, and motivated the construction of the present-day basilica over the original chapel. It is visited by thousands of pilgrims from every social class. Here, where the Patroness of Spain has been present for two thousand years, they find consolation, love and blessings. 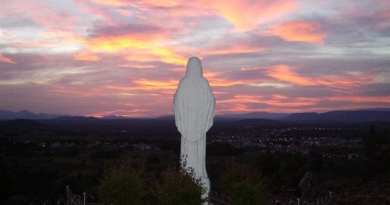 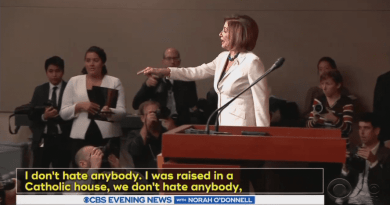 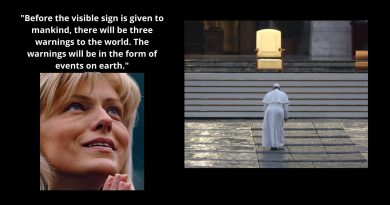 October (as well as May) is a special month for Madonna. We know that this period of the year is

US EXORCIST: “AMERICA IS A DEMONICALLY INFESTED SOCIETY – THE COMING EXORCISM OF USA

New message from “Our Lady of the Tear of Joy” Hidden graces: “Blessings come down upon you that you cannot feel, but these are true Graces and Blessings from My Son and I.”

2020 A Year Like No Other – Bible Scholars Warn- Four Horsemen of the Apocalypse and the 12 signs: Jesus Tells Padre Pio that the “World is Walking towards Ruin…”