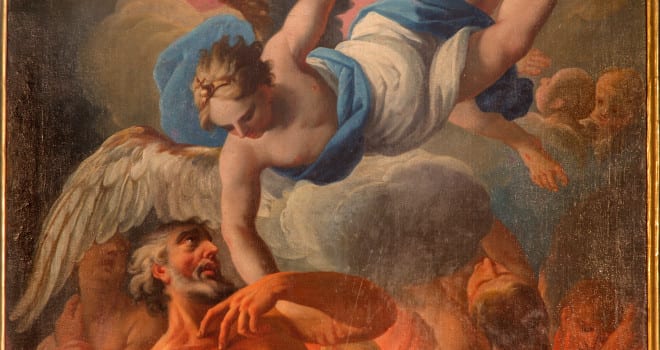 Vatican City, Nov 2, 2017 / 03:03 am (CNA/EWTN News).- Nestled in Rome just outside the Vatican, a small unassuming museum dedicated to the souls in Purgatory displays simple items such as prayer books and clothing.

Nothing too unusual, until you realize that each allegedly show the marks of the deceased – such as inexplicably burned fingerprints – when they appeared to loved ones asking for prayers from Purgatory.

The Museum of the Souls in Purgatory is located inside of the Church of the Sacred Heart of Jesus in Prati, near Castel Sant’Angelo, and contains around 15 of these testimonies and artifacts, collected from around Europe by a French priest Victor Jouët.

In many of the cases, it is held that the marks were left as proof that the deceased had really appeared, asking for prayers or for Masses to be said for their souls.

One artifact in the museum is the fingerprint of Sr. Mary of St. Luigi Gonzaga, left on a pillowcase when she appeared to Sr. Margherita of the Sacred Heart on the night after she died in 1894.

The appearance was recorded in the archives of the monastery of St. Clare of the Child Jesus in Bastia, Italy. According to the records, Sr. Mary told Sr. Margherita that she was in Purgatory as expiation of her lack of patience in accepting God’s will.

Another is the prayer book of Maria Zaganti which shows three fingerprints left by her deceased friend Palmira Rastelli on March 5, 1871. The sister of the parish priest, she asked appeared to her friend to ask for Masses to be said by her brother Fr. Sante Rastelli.

A mark of fiery fingerprints were also left on the German prayer book of George Schitz by his brother Joseph on Dec. 21, 1838. He asked for prayer in expiation of his lack of piety during his life.

In 1897 the chapel caught on fire. When Fr. Jouët rushed into the chapel, he saw the image of a human face, looking sad and melancholy, impressed upon the wall behind the altar. He believed it to be from the soul of a deceased man trying to contact those on earth.

After this occurrence, the priest decided to create a museum dedicated to the artifacts of other appearances of souls in Purgatory. He travelled around Europe and Italy collecting the items and testimonies.

Each piece in the museum was collected by Fr. Jouët from the same person who experienced the vision. The image of the man from the chapel can also be found there.

While he travelled around, Fr. Jouët also asked for money to build a church on the site of the chapel, which he had received a message to build in a dream.

Other artifacts in the museum include the print of a hand and a cross left on a the wooden table of Venerable Clara Isabel Fornari, abbess of the Poor Clares of the Monastery of St. Francis in Todi, Italy, by the deceased Fr. Panzini, on Nov. 1, 1731.

There is also a copy of an Italian 10 lira banknote, one of 30 notes left at the Monastery of St. Leonardo in Montefalco by a deceased priest between Aug. 18 and Nov. 9, 1919.

Catholic teaching on the afterlife is that there are three places for a soul to go after death: Heaven, Hell, or Purgatory.

According to the Catechism of the Catholic Church, those who go to Heaven are “(t)hose who die in God’s grace and friendship and are perfectly purified live for ever with Christ.”

Those souls that go to Hell are those who have freely chosen through mortal sin “exclusion from communion with God and the blessed.”

Purgatory is a place where the souls go who die in friendship with God but are still imperfectly purified. Purgatory is where “after death they undergo purification, so as to achieve the holiness necessary to enter the joy of heaven.” These souls are ensured eventual entrance into Heaven, once they are purified.

The Church teaches that souls in Purgatory rely on the prayers of souls still on Earth to relieve some of their temporal suffering and speed their journey to Heaven. In return, the souls in Purgatory can also pray for those on earth.

This article was originally published on CNA Nov. 4, 2016.

One thought on “Have souls in Purgatory visited people on earth? Signs left behind hint of visits.”

– Is it possible that many things that happen in Medjugorje can be invented? Bishop Hnilica – Some years ago,

In the dark and sad moments of the history of humanity we cling to faith and return to prayer. This