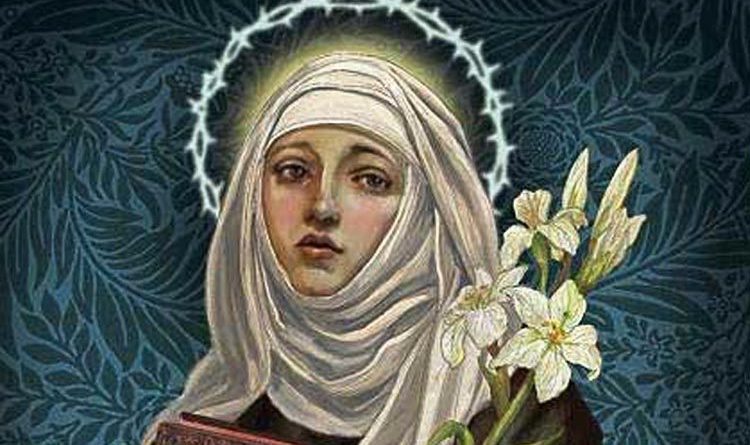 O Holy Spirit,
come into my heart:
for your power
draw it to you, O God,
and grant me charity
with your fear.

Deliver me, O Christ,
from every bad thought:
warm up and fierce me
of your sweetest love,
so every punishment
it will seem light to me.
My Holy Father,
and sweet my Lord,
now help me
in all my actions.
Christ, love,
Christ, love. Amen.

TAGS: PRAYER TO THE HOLY SPIRIT OF SAINT CATHERINE OF SIENA

Saint Catherine of SienaTOSD (25 March 1347 in Siena – 29 April 1380 in Rome), was a tertiary of the Dominican Order and a Scholasticphilosopher and theologian who had a great influence on the Catholic Church. She is declared a saint and a doctor of the Church.

Born in Siena, she grew up there and wanted very soon to devote herself to God, against the will of her parents. She joined the Sisters of the Penance of St. Dominic and made her vows. She made herself known very quickly by being marked by mystical phenomena such as stigmata and mystical marriage.[1]

She accompanied the chaplain of the Dominicans to the pope in Avignon, as ambassador of Florence, then at war against the pope. Her influence with Pope Gregory XI played a role in his decision to leave Avignon for Rome. She was then sent by him to negotiate peace with Florence. After Gregory XI’s death and peace concluded, she returned to Siena. She dictated to secretaries her set of spiritual treatises The Dialogue.

The Great Schism of the West lead Catherine of Siena to go to Rome with the pope. She sent numerous letters to princes and cardinals to promote obedience to Pope Urban VI and defend what she calls the “vessel of the Church.” She died on 29 April 1380, exhausted by her penances. Urban VI celebrated her funeral and burial in the Basilica of Santa Maria sopra Minerva in Rome.

The devotion around Catherine of Siena developed rapidly after her death. She was canonized in 1461, declared patron saint of Rome in 1866, and of Italy in 1939.[2] First woman declared “doctor of the Church” on 3 October 1970 by Pope Paul VI with Teresa of Ávila, she was proclaimed patron saint of Europe in 1999 by Pope John Paul II. She is also the patron saint of journalists, media, and all communication professions, because of her epistolary work for the papacy.

Catherine of Siena is one of the outstanding figures of medieval Catholicism, by the strong influence she has had in the history of the papacy. She is behind the return of the Pope from Avignon to Rome, and then carried out many missions entrusted by the pope, something quite rare for a simple nun in the Middle Ages.

Her writings—and especially The Dialogue, her major work which includes a set of treatises she would have dictated during ecstasies—mark theological thought. She is one of the most influential writers in Catholicism, to the point that she is one of only four women to be declared a doctor of the Church. This recognition by the Church consecrates the importance of her writings.

Since 18 June 1939, Catherine of Siena has been one of the two patron saints of Italy, together with Francis of Assisi.[3] On 3 October 1970, she was proclaimed a Doctor of the Church by Pope Paul VI,[4] and on 1 October 1999, Pope John Paul II named her as one of the six patron saints of Europe, together with Benedict of Nursia, Saints Cyril and Methodius, Bridget of Sweden and Edith Stein.[5][6]

by Papaboys 3.0 Editorial board This message of the Virgin was immediately sent to Pope John Paul II. “With the events

President Trump plans to declare a national emergency over the coronavirus pandemic, administration officials told NBC News. The president has