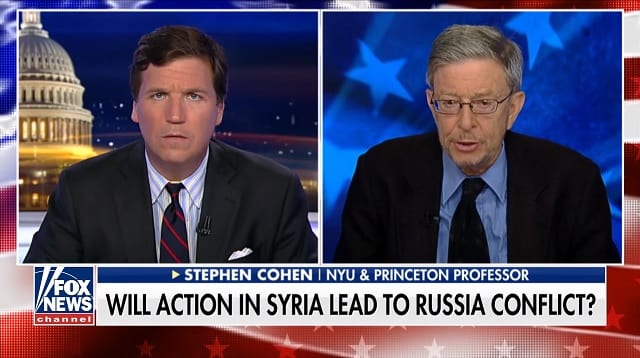 “Russiagate” is abetting the possibility of direct military conflict with Moscow, and liberals, once opponents of such politics, are promoting it.

A lifelong “liberal Democrat” of varying sorts, Cohen frames the question as follows:

Each month brings the United States closer to actual war with Russia. Three peril points are well-known: Syria, where Moscow recently blamed the “two-faced American policy” in the country for the death of a Russian general in an ISIS attack; Ukraine, where Congress and perhaps the Trump administration have decided to send more weapons, which Kiev vows to use against Russian-backed rebels in Donbass; and on Russia’s western borders, where the Washington establishment says Moscow is menacing “NATO’s borders”—without explaining how NATO got there from Germany.

But there is another perilous factor—the one in Washington called “Russiagate,” with its persistent (and still unproved) dual allegations that “Putin’s Kremlin” directed a massive attack on American democracy in various ways during the 2016 presidential campaign, from hacking the DNC and disseminating e-mails unfavorable to Hillary Clinton to using Russian media agencies and even Facebook to plant “Russian disinformation” and related pro-Trump “fake news” in the minds of American voters. And, still more, that Trump’s American “associates,” perhaps the president himself, “colluded” with the Kremlin in this nefarious operation.

Having grown into an inescapable political phenomenon, “Russiagate” abets the chances of war with Moscow in at least three ways. It depicts Russia as a “hostile nation.” It has crippled Trump’s promise to ease tensions by cooperating with Moscow. And it discourages anti–Cold War voices in American mainstream media and politics.

In the past, liberal Democrats did not always, initially, or unanimously oppose such practices, but eventually many of them did so, as during the Vietnam War and the run-up to the invasion of Iraq. But for more than a year the Democratic Party, including leading liberals, as well as influential media outlets associated with them, have been deeply complicit in promoting “Russiagate,” with few if any mainstream exceptions.

Indeed, “Russiagate” allegations did not begin after Trump’s election in November 2016, as widely said, but in the summer and fall of 2016, with liberal Democratic journalists and pro-Clinton media, including The New York Times, seeding the notion of a “Trump-Putin” conspiracy, with the now infamous anti-Trump “dossier,” then being secretly funded by the Clinton campaign, and Mrs. Clinton herself branding Trump a “Putin puppet” during one of their nationally televised debates. When President Obama announced sanctions against Russia in December 2016, including, he said, cyber-attacks embedded somewhere in that nuclear country’s infrastructures, he cited what has become known as “Russiagate” as a reason, still without presenting any proof.

Since then, Democrats, many of them self-professed liberals, have unrelentingly pumped up and perpetuated “Russiagate.” In Congress, for example, Representatives Adam Schiff, Jackie Speier, Eric Swalwell, and Maxine Waters, and Senators Mark Warner and Richard Blumenthal have been in the forefront. Abandoning journalistic standards of verifiable evidence, reliable sources, and balanced coverage, The New York Times and The Washington Posthave increased their publication of sweeping allegations as virtual facts. (For their practices, see the many critical articles by the award-winning journalist Robert Parry at consortiumnews.com.) That print news is amplified almost nightly on MSNBC and CNN. Many other smaller liberal outlets play the same role.

Still worse, liberal or pro-Democratic media have trumpeted “Russiagate’s” most reckless charge that in 2016 America “came under attack by the Russian government,” as Morgan Freeman intoned in a recent video produced by Hollywood liberals. “We are at war,” he declared. Can this mean anything other than that Washington must immediately launch an “attack” on the other nuclear superpower?

Nor is this implicit call for war merely coming from questionably informed celebrities. During the past week, a Times editorial told readers that in 2016 Russia “sought to undermine America’s own sovereignty,” much as it had done Ukraine’s in 2014. According to the eminent liberal Democratic policy intellectual Robert Reich, Russia committed an “unprecedented attack on our democracy,” the professor apparently having forgotten or discounted Pearl Harbor and 9/11. And in a major foreign-policy speech on September 21, the “maverick” Bernie Sanders told the Democratic Party, “We now know that the Russian government was engaged in a massive effort to undermine one of our greatest strengths: The integrity of our elections, and our faith in our own democracy.”

No, Cohen emphasizes, we do not “know” that, which brings him to what liberal Democrats have not done, but what they once did:

If you like this article, please give today to help fund The Nation’s work.

§ They have evinced no skepticism regarding official and mainstream-media allegations about a purported Kremlin hack of the DNC or its surreptitious abuse of Facebook and other media, despite contrary evidence and testimony. Pro-Democratic mainstream newspapers and networks have produced no investigations or editorials in this contrarian regard, again with few exceptions.

§ They have not protested, as liberals once did, the growing criminalizing of customary “contacts” with Russia—financial, diplomatic (such as back channels), even conjugal, but while still promoting the truly “fake news” anti-Trump “dossier.”

§ Though once the enemies of covert-intelligence operations in American politics, liberals have not protested, or even shown interest in, the now evident role of Obama’s Intel chiefs in the origins and perpetuating of “Russiagate.” And they have shown even less interest in new evidence that Trump’s campaign was in fact surveilled by the FBI, as the president later suggested, for which he was widely derided. (See, for example, Evan Perez, et al., CNN.com, September 19.) Instead, Democrats, including liberals, have turned the intelligence agencies into an iconic source (of testimony and leaks). Indeed, Obama’s director of national intelligence, James Clapper, whose ethnic slurs about Russians as inherently subverting did not perturb liberals either, is on the advisory board of Hollywood’s new “Committee to Investigate Russia,” which scripted Morgan Freeman.

§ Above all, perhaps, liberals once would have been shocked into protest by a recent Times article characterizing Special Counsel Robert Mueller’s investigative methods as “aggressive tactics,” “shock-and-awe tactics to intimidate witnesses and potential targets.” Methods, as one source put it, “to strike terror in the hearts of people in Washington.” But there is no liberal outrage, no ACLU actions, only articles applauding Mueller for his “scrupulousness” and egging him on, as by Ryan Lizza in The New Yorker. Not even when the Times suggests that Mueller, unable to find evidence of electoral “collusion,” might be “on a fishing expedition” reminiscent of past abuses. (Now we learn Mueller wants IRS records going back many years, long before Trump’s political rise. Will Democratic figures who participated in the plunder of Russia in the 1990s worry about where such investigations will stop?)

§ Finally, liberal Democrats seem indifferent to the slouching toward forms of media censorship. Some of it is soft: Informed anti-“Russiagate” and anti–Cold War voices are regularly excluded from mainstream news reporting, opinion pages, and broadcast panels. But there is also an adumbration of harder censorship—official and unofficial campaigns, both well-funded, to purge “Russian disinformation and propaganda” from American media, even if expressed by Americans as their own analytic, dissenting opinion. (See Samantha Power’s demand that we “enhance our vigilance” and her longing for media “gatekeepers” and “umpires.”) And this too betrays a disregard for the First Amendment but also contempt for American voters, who presumably, zombie-like, have no critical minds of their own. About this, the normally loquacious PEN and other civil-liberties guardians are also silent.

In short, Cohen thinks, liberal Democrats are betraying their own best traditions. Privately, some justify their new illiberalism by insisting it is necessary for the “Resistance” against Trump, that Trump is the greater evil. But history has long shown that such ends-justify-means reasoning does not end well for liberals—or anyone else.

And, of course, liberal Democrats were once in the forefront of politics to avoid nuclear war with Russia. No longer. 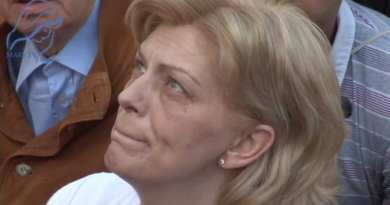 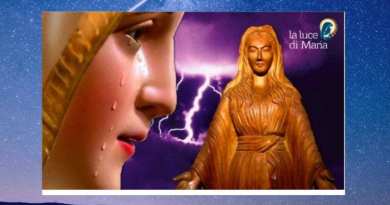 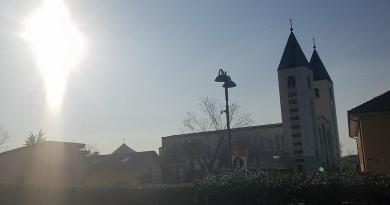 Source: La Luce di maria translated by Google from Italian “I wish to thank Our Lady who in the trial

Dear Mystic Post Reader: Paul J Watson is a warrior against political correctness and an important voice protecting our  freedom