A MASSIVE UFO appeared in live footage of the sun before the FBI dramatically shutdown the National Solar Observatory, conspiracy theorists claim.

Employees at the site in Sunspot, New Mexico, were forced to leave as agents rushed to the research centre last Thursday.

The building remains on lockdown, surrounded with yellow tape, with no timeframe given to local police as to when it would reopen.

Tyler Glockner, who runs YouTube conspiracy channel secureteam10, speculated the observers may have come across extraterrestrial life while picturing the sun.

Tyler claimed the FBI would have been brought in to remove any evidence of this. 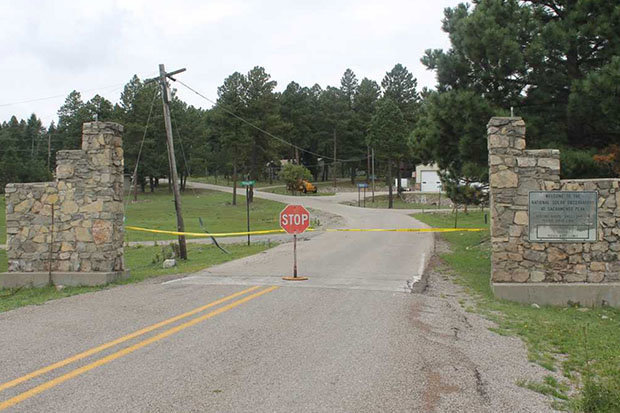 TWITTERBLOCKED: FBI taped off the entrance to the National Solar Observatory
“The second one is obviously a different object, it’s the same camera, the same view.“Two objects, two different sizes, one goes one way and the other goes another way.“Don’t you think that’s odd?

Mystery still surrounds the closure with local police in the dark

Otero County Sheriff Benny House told ABC: “The FBI is refusing to tell us what’s going on.”We’ve got people up there (at Sunspot) that requested us to standby while they evacuate it, nobody would really elaborate on any of the circumstances as to why.”For the FBI to get involved that quick and be so secretive about it, there was a lot of stuff going on up there.

“There was a Blackhawk helicopter, a bunch of people around antennas and work crews on towers but nobody would tell us anything.”

Reports suggested there had been a “security issue” at the site.