According to the Vatican’s most famous Mariologist, Rene Laurentine,  in October of 1981 the Queen of Peace at Medjugorje, in a sensationally prophetic, yet little known, message said that “Russia would come to glorify God the most”… and that the West would  make modern progress but would turn away from God.  Then on August 25, 1991,  the Queen of Peace, said in a message for the world “…I invite you to renunciation for nine days so that with your help everything I wanted to realize through the secrets I began in Fatima may be fulfilled”.  The visionaries have said that Medjugorje is the fulfillment of Fatima.”

Mystic Post believes we are now in a special time in history. We see that today’s world is dominated by two events that lend evidence to the possibility that Catholic prophecy, both at Fatima and Medjugorje are unfolding right before our eyes.

1. Progressive culture in the West is determined to remove Christianity (if not destroy it) from the public square.
2. The rise of Christianity  in Russia is at the root of the hostilities between Russia and the USA.

At Fatima, a prophecy was made by the Virgin Mary that “Russia would error”.  Within a matter of years the world saw this prediction come true as progressive liberals – the Bolsheviks – overthrew the Tsarist Government and replaced it with the atheist, totalitarian state  of the Soviet Union. Gulags, the murder of 1000s of priests, and the death of millions of people would be its legacy. The “error” was the direct attack against Christianity.

Today we see ominous signs of Our Lady’s warning that again the world will “error” and turn away from God.  We see in the West a determined, progressive culture, wholly supported by most major media institutions, beginning to aggressively attack Christianity. A good example of this is the growing phenomenon of the bigoted reaction to the name “Mike Pence”.

I have been personally victimized by more people than I care to admit after making the point that: “I think Mike Pence has been a good VP and he helped Trump get elected because he completely destroyed Hillary’s running mate Tim Kaine”.  The simple point that Mike Pence is a decent American sends many people into an uncontrolled rage and at the root of the anger is that he is an unapologetic Christian.

I have tried to make the point to my accusers that anti-christian bigotry is not only real but is extremely dangerous as evidenced by what happened in the atheist state of the Soviet Union. It’s important to understand that it was the “progressives” and their anti- Christian movement that led to quite literally the most epic chastisement against humanity in the history of the world.

Most people, of course roll their eyes at my warnings – but it no longer bothers me because now the truth is so obvious and the American citizens who are committed to a progressive Godless mindset will only see events through their righteous eyes. I’m the “hater” they are the “tolerants”. There is nothing I can do about that and yet there is nothing further from the truth. But the genie is out of the bottle.

If Senate Democrats and their media allies manage to destroy Brett Kavanaugh, they will bring America one step closer to a new, liberal style of totalitarianism.

I don’t use the “T”-word lightly. I’ve spent years pushing back against those who fling it about in free societies like ours. But totalitarianism doesn’t require cartoonish, 1984-style secret police and Big Brother. The classical definition is a society where everything — ethical norms and moral principles and truth itself — is subjugated to political ends.

By that measure, the Democratic campaign to block Kavanaugh’s nomination to the Supreme Court, based on a hazy, uncorroborated, decades-old assault allegation, tends toward the totalitarian. Certainly, it has many of the elements of abusive politics that Americans normally associate with foreign lands untouched by the light of liberty and reason:

An (initially) anonymous accusation, surfaced at the 11th hour, seemingly calculated to strike terror into the hearts of Kavanaugh and his family members and supporters? Check! That came in the form of Sen. Dianne Feinstein’s cryptic statement last week, confirming that she had “received information from an individual concerning the nomination” of Kavanaugh but declining to offer any details.

An accusation that’s impossible to rebut? Check! Senate Democrats are demanding that the FBI look into the allegations first before the Judiciary Committee holds a hearing. But Kavanaugh’s accuser, Christine Blasey Ford, can’t remember the time or location of the alleged incident. An FBI probe is impracticable, not to mention improper given the lack of a federal crime.

Kavanaugh’s integrity is thus besmirched, and the path to the only forum where he could clear his name is obstructed.

A media mob that treats the mere existence of an accusation as proof of its veracity? Check! The examples of this are legion. My favorite came courtesy of the Atlantic writer who claimed that her own run-in with a pervert meant that Kavanaugh is also guilty. This, just a couple of years after Rolling Stone’s University of Virginia fiasco was supposed to have taught reporters a lesson about the importance of listening to the accused as well as the accusers.

It didn’t have to be this way.

Feinstein didn’t have to leak the anonymous accusation to the press, contrary to Ford’s wishes. Or she could have urged Ford to go public early, giving both parties enough time to be heard.

Even now, Feinstein and her colleagues could back a committee hearing, without which Kavan­augh has no realistic opportunity for mounting a defense. Kavan­augh is a judge and a political operator. But he ‘s also a father and husband.

But no. Senate Dems have settled on the ugliest means available, even by the standards of the body that added the verb “Borking” to our political vocabulary. The question is: Why have Republican high-court nominations brought out the worst from the left, going back to the Ronald Reagan era?

The short answer is that liberals fear their major cultural victories of the past half-century are democratically illegitimate. Not a single one was won at the ballot box, going back to the Supreme Court’s 1965 Griswold decision, which recognized a constitutional right to contraceptives. From abortion to gay marriage, plus a host of less titillating issues, modern liberalism has lived by the Court. And liberals fear their cause will die by the Court.

Unless, that is, they block conservative encroachments into the judiciary by all means necessary. Hence, Borking and Clarence Thomas-ing. And hence, too, the naked slandering of Mitt Romney in the course of the 2012 presidential campaign, to forestall his shifting the Court to the right.

I wish I could say that the way out of this impasse is for the right to double down on the gentle conservatism represented by Romney, the Bush dynasty, and the late John McCain. Perhaps that is the right course in the long term. But for now, it is imperative for the health of American democracy to resist the liberal ruthlessness that is on display in the halls of the Senate.

The verb “to Kavanaugh” must not be permitted to enter our lexicon, lest the step to unfreedom become irrevocable.

Sohrab Ahmari is senior writer at Commentary and author of the forthcoming memoir of Catholic conversion, “From Fire, By Water.” 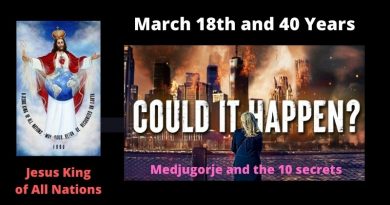 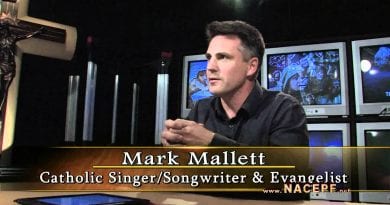 SOURCE FACEBOOK The Holy Spirit hovers over the Sun on the Sea of GalileeCamden Diocese Pilgrim, Mariann Gilbride got this

MEDJUGORJE: THE HOLY MOTHER REVEALS WHAT YOU RECEIVE AT THE EXACT MOMENT OF OUR DEATH