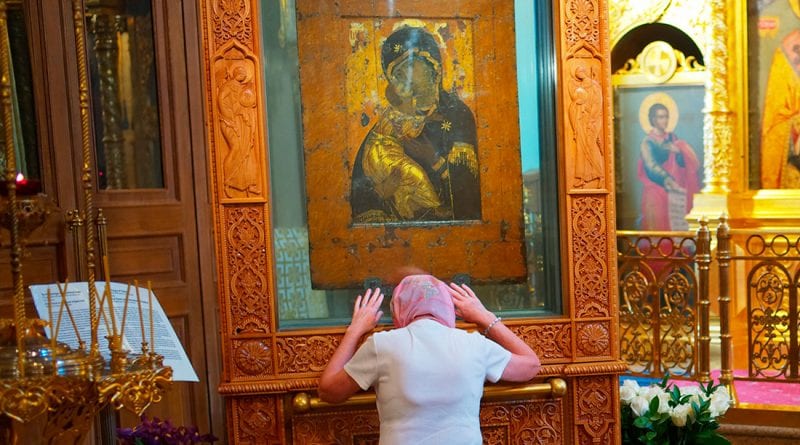 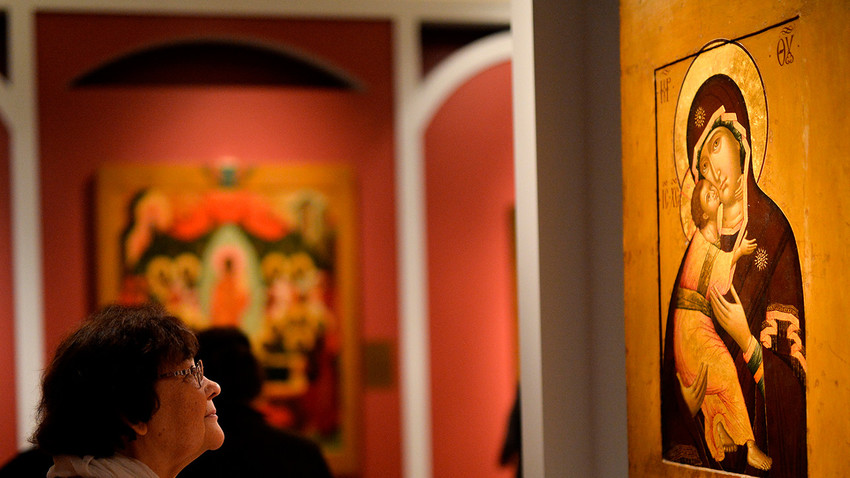 Vladimir Astapkovich/Sputnik
Orthodox Christianity, the most influential confession in Russia, provides the faithful with many objects of worship, especially icons: beautiful, spiritual and believed (by some) to perform miracles and protect the country from the enemy.

1. Our Lady of Vladimir 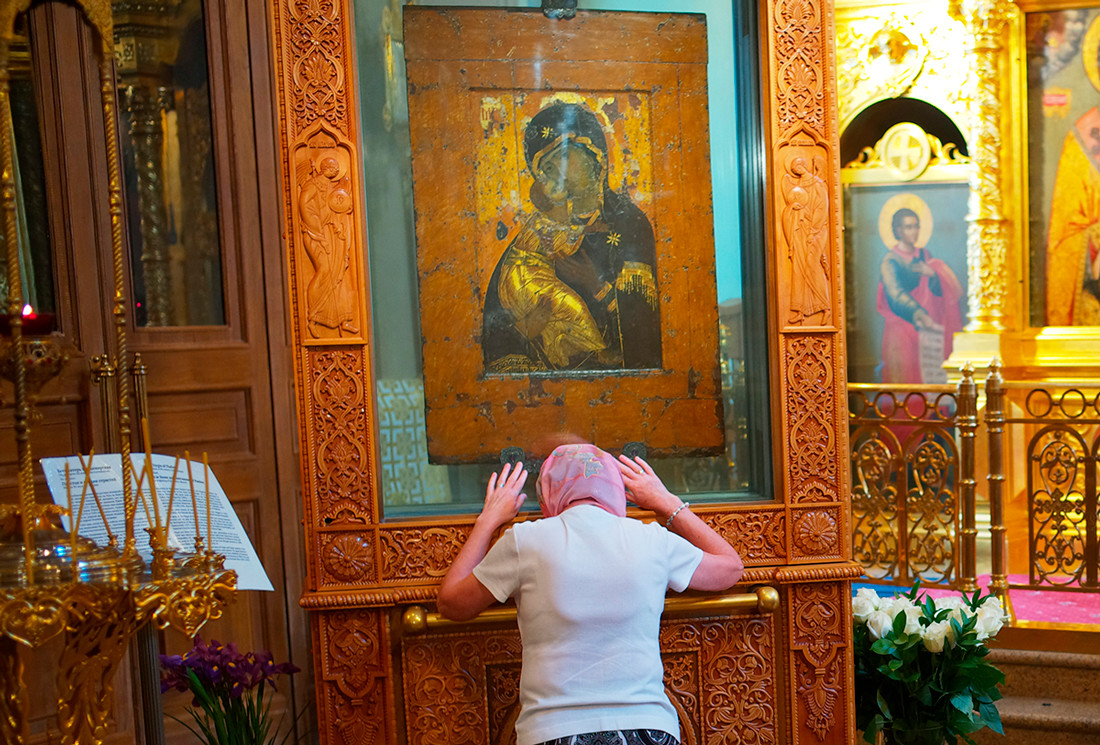 Believers at the Vladimir Icon of the Mother of God in the Church of St. Nicholas in Tolmachi.

One of the finest examples of Byzantine iconography is the Virgin Mary with the infant Jesus snuggling up to her cheek. Thisicon was sent to Rus as a gift in the early 12th century. The Patriarch of Constantinople gave it to a Russian prince; subsequently it changed owners during periods of wars and strife, finally finding a home in the city of Vladimir.

In 1395, Prince Vasily of Moscow took the icon to his city, seeking the help of God – that year Tamerlane, a powerful and ruthless conqueror from Middle Asia turned his eye on Moscow. His army would have defeated the Russians and burned the city, but Muscovites prayed to Our Lady of Vladimir. Tamerlane changed his mind and decided not to invade. Of course, believers attribute this to the Virgin Mary.

Two more times, in 1451 and 1480, the pattern repeated: Moscow was just about to be invaded, defeated and burned by the Mongols, but in the end they didn’t fight the Russians.Orthodox believers were sure that the icon saved their city. This is why the icon is believed to be miraculous.

Where to find it today: in St. Nicholas Church near the State Tretyakov Gallery, Moscow

2. Our Lady of Kazan 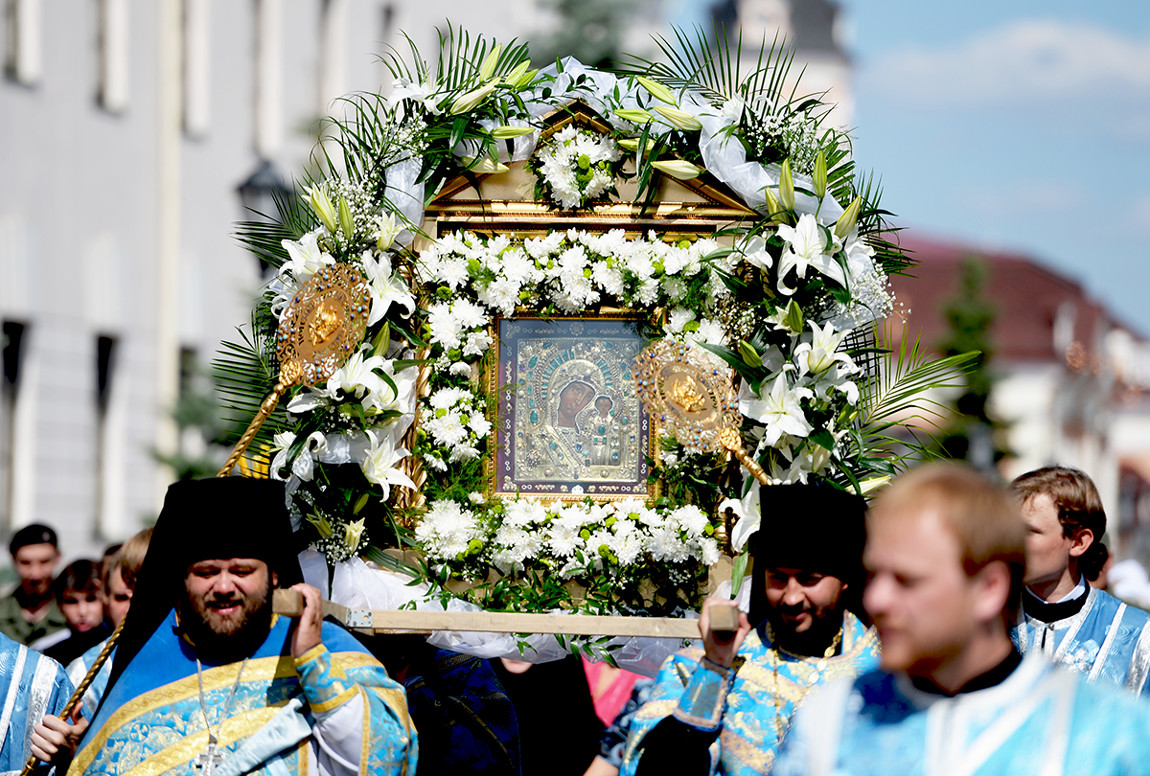 Participants of the procession in honor of the appearance of the Icon of the Mother of God in Kazan.

Yes, Russians love the Virgin Mary, so here is another Byzantine icon of her. Lost in the 15th century, it was mysteriously found 140 years later, in 1579, after a great fire in Kazan. According to legend, the Lady of Kazan came to a little girl, Matrona, in her sleep and asked to look for her image in the ashes. The girl listened and later became a nun in the monastery where the icon was kept.

Much like her “sister” in Vladimir, the Lady of Kazan was later moved to the capital. In 1612, the Russian army carried it as a holy banner during their battle against the Poles who occupied Moscow – and won. Since then, the Virgin Mary of Kazan is also known as the Holy Protectress of Russia.

In 1904, the unspeakable happened: someone stole the icon from the monastery in Kazan. Since then, the fate of one of Russia’s most worshipped symbols is unclear. Nevertheless, there is an excellent copy of the original icon, which traveled the world and was given back to the Orthodox by Pope John Paul II.

Where to find it today: in the Bogoroditsky Monastery of Kazan (copy)

3. “The Trinity” by Andrei Rublev 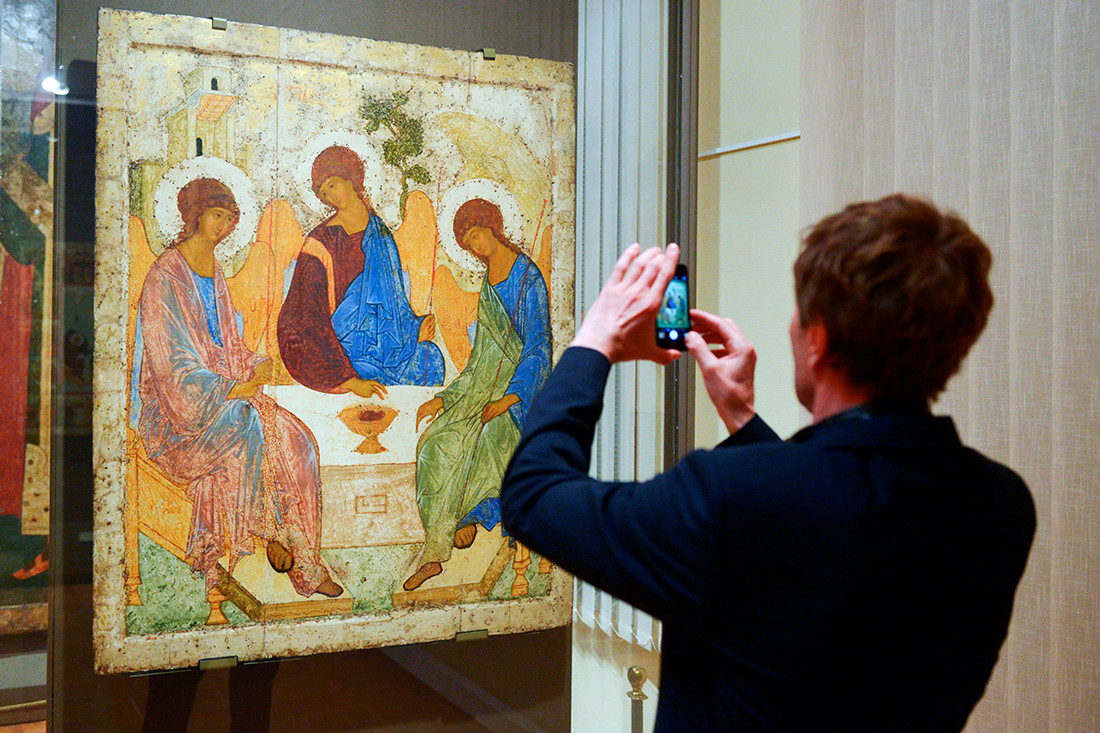 A young man taking photo of Andrei Rublev’s Icon of the Holy Trinity (1425–1427) at the Tretyakov State Gallery.

This is the first (and the last) non-Virgin-Mary icon in this list and one of the few  proven conclusively to be created by Andrei Rublev, the great Russian icon painter who lived in the 15th century. There are no legends or rumors around this icon; it’s not considered miraculous. Yet it’s one of the most beautiful pieces of art and one of Russia’s symbols.

“The Trinity,” also called “The Hospitality of Abraham,” portrays three angels that, according to the Bible, came to the house of Patriarch Abraham symbolizing “one God in three persons” – the Father, the Son (Jesus Christ), and the Holy Spirit. The icon is astonishingly harmonic and tranquil. “It shines with the highest, unearthly light that we can see only in the works of geniuses,” said Russian painter Igor Grabar about “The Trinity.”

Where to find it today: in the State Tretyakov Gallery, Moscow

4. The Theotokos of Smolensk 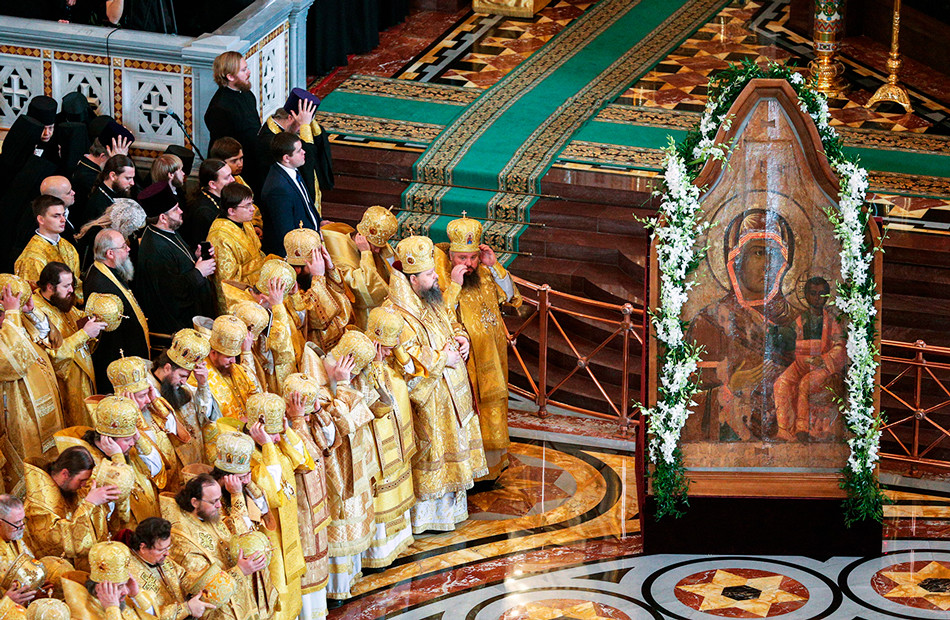 Like we said before, for Russians there is no such thing as too many miraculous icons of the Virgin Mary. This one, rumored to be painted by St. Luke the Evangelist, was given to Prince Vsevolod by the Byzantine emperor in 1046 when Vsevolod married his daughter, thus turning Kievan Rus’ into a powerful ally of the Orthodox Church.

Kept in the city of Smolensk (400 km west of Moscow), this icon was believed to protect Russian lands from western enemies. That’s why in 1812, when Napoleon invaded Russia, the army took the icon to Moscow and the whole city prayed for salvation.

The original icon, however, didn’t survive  another invasion from the West: during World War II, when Nazi Germany occupied Smolensk in 1941-1943,Theotokos was lost. Now the city owns only an exquisite copy.

Where to find it today: in the Cathedral Church of the Assumption, Smolensk (copy) 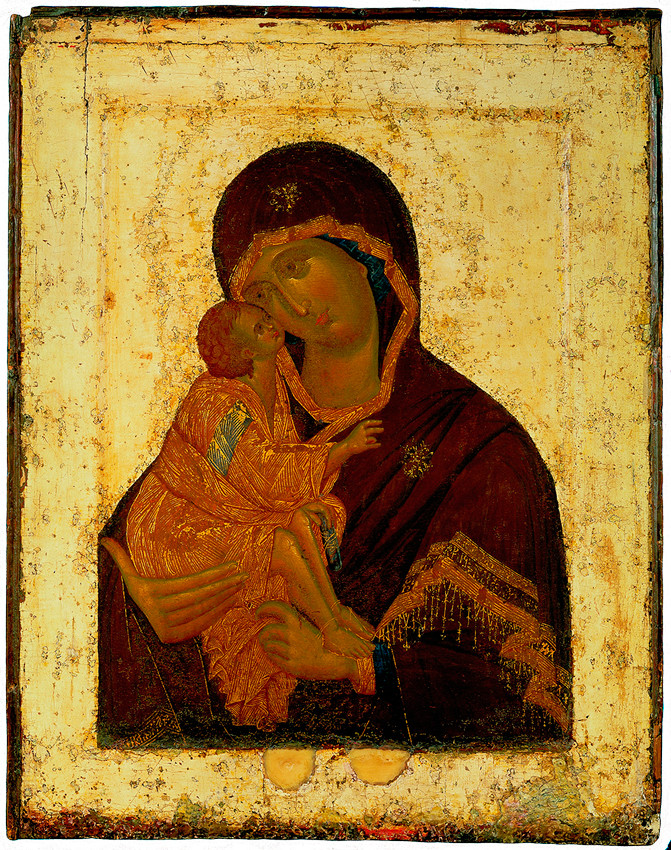 Yet another of Russia’s many ‘ladies,’ this one is believed to be painted by Theophanes the Greek, Andrei Rublev’s teacher and another great icon painter. Legend says the Cossacks gave this icon to Prince Dmitry of Moscow a day before he defeated the Mongols in the glorious battle of Kulikovo. Though it’s most likely a fake, Our Lady of the Don had its fame as Russia’s protector, like the others on this list.

Where to find it today: in the State Tretyakov Gallery, Moscow

If using any of Russia Beyond’s content, partly or in full, always provide an active hyperlink to the original material. 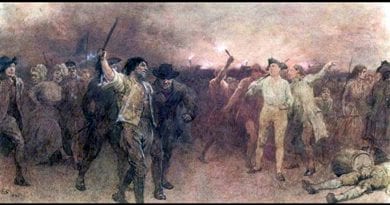