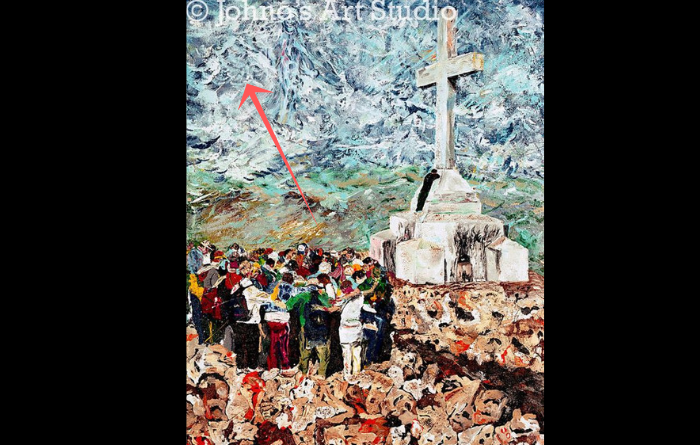 Johno Prascak lives in Pittsburg has been commissioned by the George H.W. Bush Library and other well-known people. Read more about here

“Inspired by my trip in 1990 to Medjugorje, Yugoslavia where I was commissioned to paint the holy pilgrimage. I was included in the group to go along and transfer onto canvas my innermost thoughts and somehow capture the positive spirit of the experience which included the journey up Cross Mountain and Apparition Hill. Where the Blessed Mother was reported to have appeared to a group of young children in 1980’s I saw suffering souls of purgatory in the rocks of Mt. Krisevac. I witnessed the pilgrims longing to be closer to God. I placed an image of the Blessed Mother in the stormy sky top left as she watches over the group as they prayed at the foot of her Son’s cross. The original 4′ x 5′ on canvas hangs in the chapel at Gospa Missions, Evans City, PA. The original was created using enamel and sand, soil and rocks from the mountains and hills surrounding Medjugorje.” Johno Prascak

Is it possible…That there exists a Catholic mystery that holds the secret of America’s future?That this mystery lies behind everything from WWII, the Russian Revolution, and today’s emerging conflict between the United States and Russia?That this Catholic Prophecy is revealing itself in America?That God, through his Messenger the Mother of Christ, is sending America a prophetic message of what is yet to come? 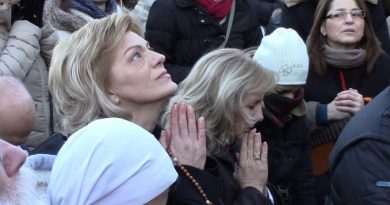 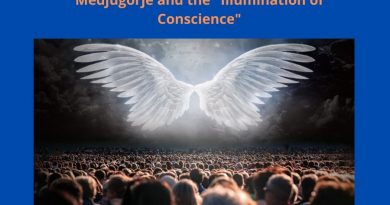 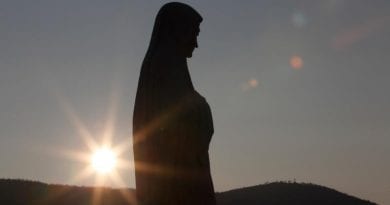 Source: National Review Briefs filed by a wide range of religious groups—Christian, Jewish, and Muslim—express deep concern that the position

read full article at NY Post It’s been a helluva year for Unidentified Flying Objects. Once thought to be fictional