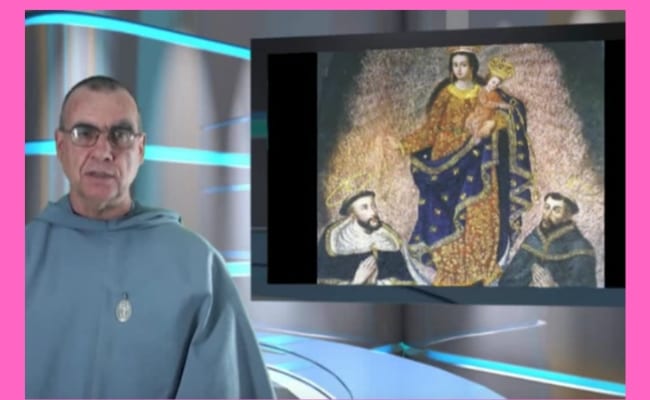 “After extensive investigations, civil authorities and scientists determined that the scene was not a painting at all. The image is miraculously part of the rock itself!

Geologists have since bored core samples from several places in the rock and discovered that there is no paint, dye, or pigment on the surface of the rock. The colors of the mysterious image are the colors of the rock itself and extend several feet deep inside the rock! The only man-made aspects of the miraculous image are the crowns above the heads of Jesus and Mary that were later added by local devotees. For more than two centuries, the location has been a place of pilgrimage and devotion. In 1951, the Church authorized devotion to Our Lady under the title of “Our Lady of Las Lajas,” and the church built around the image has been declared a minor basilica.”

In 1754, an event took place in Colombia that continues to baffle geologists and other scientists. This event was the miraculous appearance of the image of Our Lady of Las Lajas (Our Lady of the Rocks).

Have you heard of it?  Most Catholics outside of Colombia are completely unaware of its existence.  To be honest, I had never heard of it either until a few years ago.  I came across the story of this incredible image while doing research for my book Champions of the Rosary: The History and Heroes of a Spiritual Weapon.

All my friends know that I absolutely love leading pilgrimages.  In fact several times a year I lead pilgrimages to such places as Rome, Lourdes, Fatima, Guadalupe, Poland, and the Holy Land. One place I’ve never been on pilgrimage is Colombia. But after I learned about the miraculous image of Our Lady of Las Lajas, making a pilgrimage to Colombia is now on my bucket-list. It might become a bucket-list destination for you, too. Here’s why:

As the story goes, one day a woman named María Mueses de Quiñones was walking with her deaf and mute daughter, Rosa, through a very treacherous and rocky area on their way home from a nearby village. When a storm broke out, Maria and her daughter took shelter in the rocky cliffs of a canyon. All of a sudden, little Rosa spoke for the first time, declaring that she saw a beautiful woman who was calling her. Maria did not see or hear the woman, but was amazed that her daughter could now speak. A few days later, Rosa disappeared from the village. Her mother instinctively knew to return to the rocky canyon where she would find her little girl. Incredibly, when Maria went to the rocks, she found Rosa playing with a little child whose mother stood nearby. It was an apparition of the Virgin Mary and the Child Jesus! Maria and her daughter decided to keep this event secret, but would frequently return to the rocks to pray and ask Our Lady for her intercession.

Our Lady of Las Lajas

After a few months, little Rosa suddenly fell ill and died. Distraught, Maria took her deceased daughter to the rocks to ask Our Lady to intercede with her divine Son to bring Rosa back to life. Miraculously, Rosa came back to life! When Maria returned to the village and the people saw that Rosa was alive, their interest was piqued about this place where little Rosa had miraculously recovered her speech and even come back from death.

The villagers followed Maria and Rosa to the rocks to see the place themselves. While they were there, someone noticed a beautiful image of Our Lady on the rocks. Neither Maria nor Rosa had seen the image there before. No one knew who had painted it or where it had come from. In the beautiful image, Our Lady is holding the Child Jesus and handing St. Dominic a rosary; the Child Jesus is extending a friar’s cord to St. Francis of Assisi.

Whether or not I will ever make it to Colombia to see this incredible image remains unseen, but if you ever find yourself in Colombia be sure to visit this holy shrine.  The basilica itself looks like something out of Lord of the Rings!

Our Lady of Las Lajas, pray for us!

Fr. Donald Calloway, MIC, has been a priest for 15 years and currently serves as Vicar Provincial and Vocation Director for the Congregation of Marian Fathers of the Immaculate Conception. He is the author of eleven books, a popular speaker at conferences, and frequently leads pilgrimages to Marian shrines around the world. To find out more about his books and pilgrimages, go to www.fathercalloway.com 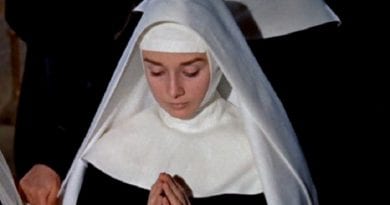 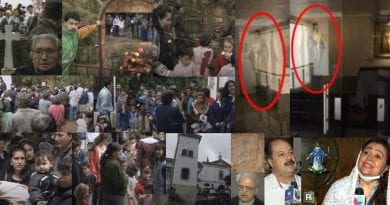 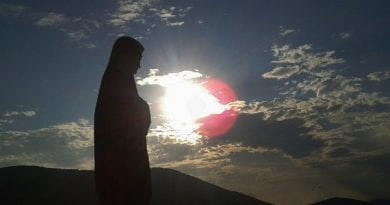 The black dog in the middle photo above was taken next to the statue of the “Risen Christ”.  A rose