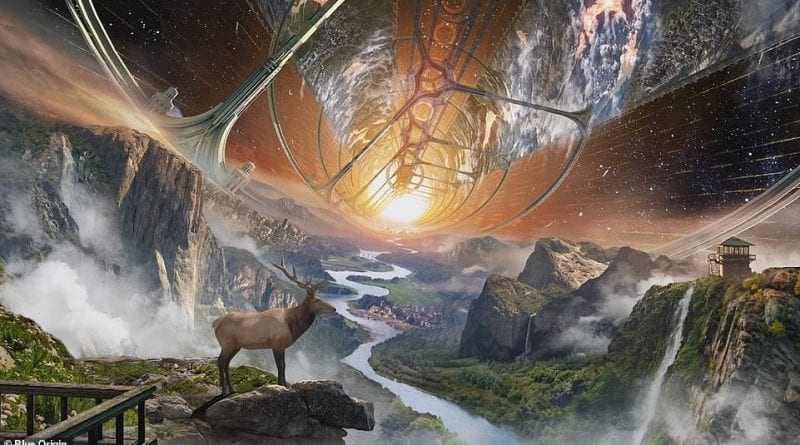 Last week, Amazon CEO Jeff Bezos finally lifted the veil on the lunar lander his aerospace company has been developing in secret for years, along with a plan to put humans back on the moon to stay.

And in the process, he also revealed an ambitious vision for space colonization.

Building off of a concept introduced decades ago by physicist Gerard O’Neill – who Bezos himself studied under during his time at Princeton, according to Fast Company – the Blue Origin founder outlined self-sustaining habitats that could hold entire cities, agricultural areas, and even national parks in space.

While such a future may still be a ways off, Bezos says it will be an ‘easy choice’ when faced with dwindling resources on Earth.

The habitats, reminiscent of the film Interstellar, could be built close enough to Earth to allow people to travel back and forth, and house ‘a million people or more each.’ And, according to Bezos, they’d have the ‘ideal climate’ at all times, ‘like Maui on its best day, all year long.’

‘We get to choose, do we want stasis and rationing, or do we want dynamism and growth?’ Bezos asked during the invite-only event in Washington DC on May 9th.

‘This is an easy choice. We know what, we want we just have to get busy.

The concept was first posited in the 1970s by Bezos’ former professor O’Neill, whose proposed habitats would rotate in space to create artificial gravity based on centrifugal force.

Our Lady of Beauraing is the last Marian apparition to have the approval of Rome. It is very wise to