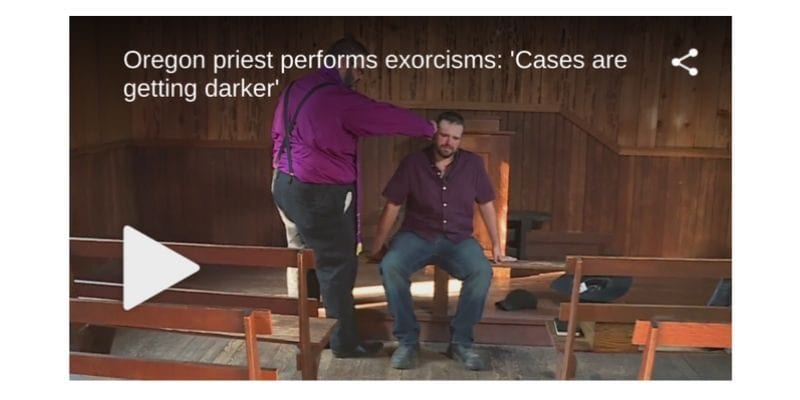 PORTLAND, Ore. (KOIN) — For most people, tales of exorcisms are nothing more than blockbuster movies or scary stories that incite nightmares.

Paranormal possessions are the focus of the all-new TV drama, “Evil.” The psychological mystery on CBS pits science against religion, investigating unexplained mysteries like supposed hauntings and miracles.

But as otherworldly as it may seem, some people see an exorcism as a last-ditch effort to heal something that’s having a very real effect on their lives.

James Cloud has made it part of his life’s work.

“If I hadn’t seen half the stuff I’ve seen in life, I wouldn’t believe it, either — until it actually happens,” he said.

The Medford-based religious leader and licensed counselor has performed hundreds of exorcisms.

“It was pretty much thrust on me because I’ve had the sight since I was 4,” Cloud explained.

He’s a notable presence in any room. His black cowboy hat and wooden toolbox will catch your eye before you notice his collar.

We spent an afternoon with him in Golden, Oregon. It’s an old mining town near Grants Pass, rumored to be quite haunted. Cloud said he holds training classes there for people who want to connect and communicate with the other side.

The archbishop speaks in a laid back, comfortable tone. He said he grew up learning deliverance prayers from his father, a Protestant religious leader.
He began his ministry with the Anglican church but said he was kicked out for performing exorcisms.

Cloud says he refused to stop because it would mean ignoring a huge part of his faith.

“[Many people] think reality’s very sanitized,” he said. “When people die, they go to heaven, bad people go to hell, the angels stay in heaven, the demons stay in hell — and that’s not the case. Throughout the scriptures, we see examples of angels interacting on Earth — devils and Satan himself interacting on Earth.”

He’s now a leader in the Advent Catholic Church. Commonly interchanged with titles like “Orthodox” or “Old Catholic Church,” it’s one of a group of independent Catholic denominations that don’t answer directly to the Pope in the Vatican. Instead, they align with traditions originating in Europe before the Catholic Church’s schism in 1870 known as Vatican I. They differ on things like the Pope’s infallibility, whether priests can be male or female, married or celibate. Cloud is a father and a family man and very open about the exorcist work he performs.

“Many things that would almost mirror someone that’s being possessed or oppressed — many mental health conditions will do it too,” he explained.

His other job often comes in handy. As an accredited mental health counselor, Cloud specializes in substance abuse treatment and recovery. It’s a skill he said helps in recognizing demonic possession.

“I have to differentiate: is this substance use, is it mental health, or is it a legitimate issue that’s going on?” he said. “So, if I can rule out the first 2 then what I’m left with is something that’s potentially legitimate.”

We met one such man on the day of our interview at an abandoned church in Golden. Brent Goodrich stood quietly in the back of the church in Golden, eyes trained down on the floor. The RV technician from Springfield, Oregon, drove several hours with his mom to meet Archbishop Cloud, hoping to be freed of several demonic spirits the archbishop believed were attached to him.

He seemed irritated and couldn’t stop brushing at his left ear with his hand.

“A lot of people just don’t believe you,” Goodrich said. “I didn’t think any of this stuff existed prior.”

Goodrich reached out to Cloud for help after what he described as 2 years of torment.

“They’re constantly, constantly making noise. The ones — the ones around me just hiss and hiss at me,” Goodrich mumbled.

He said he wanted to share his story publicly to show his very real anguish.

“What I see as the truth, I hope that people will find the same truth in that. I wish I’d found it another way because that is who you turn to,” he explained wearily. “I wasn’t as religious before this.”

Cloud said after speaking with Brent, he ruled out things like a substance abuse problem or mental illness.

The exorcism of Brent Goodrich

The archbishop instructs Goodrich to have a seat on an old wooden pew in the church. Cloud opens with a prayer of protection, then starts to pray over Brent, anointing him with holy oil.

One thought on “EXORCIST PRIEST: “Cases getting darker…” Performs Exorcism on tormented man”

We need to repent and believe the good news. That was Jesus’ first message when He started His public ministry;