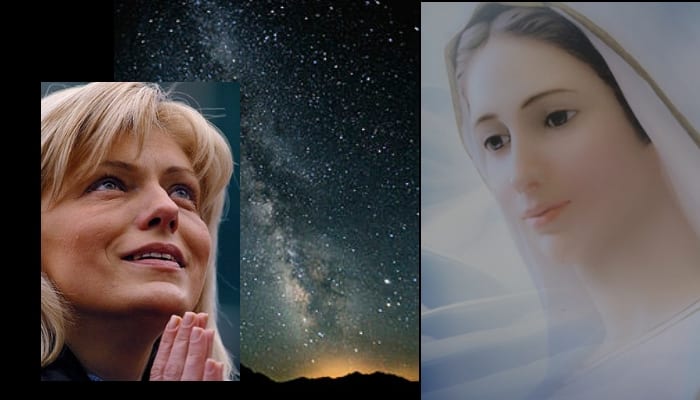 We are all privileged to be living during the climax of the universally designated “Age of Mary”. International Marian Centres such as Lourdes, Fatima and places of contemporary apparition, as well as numerous other contemporary Marian movements manifest the present climax of love and devotion to the Mother of Jesus throughout the world. But along with a climax in devotion to Our Lady, this Age of Mary is also crucially calling for a climax in the doctrine about Mary. For authentic love of Mary must be firmly based upon the authentic truth about Mary.

Dear children! Today I am calling you to reflect upon why I am with you this long. I am the Mediatrix between you and God. Therefore, dear children, I desire to call you to live always out of love all that which God desires of you. For that reason, dear children, in your own humility live all the messages which I am giving you. Thank you for having responded to my call. ”

“My children; Again, in a motherly way, I implore you to stop for a moment and to reflect on yourselves and on the transience of this your earthly life. Then reflect on eternity and the eternal beatitude. What do you want? Which way do you want to set out on? The Father`s love sends me to be a mediatrix for you, to show you with motherly love the way which leads to the purity of soul; a soul unburdened by sin; a soul that will come to know eternity. I am praying that the light of the love of my Son may illuminate you, so that you may triumph over weaknesses and come out of misery. You are my children and I desire for all of you to be on the way of salvation. Therefore, my children, gather around me that I may have you come to know the love of my Son and thus open the door of eternal beatitude. Pray as I do for your shepherds. Again I caution you: do not judge them, because my Son chose them. Thank you. ”

Medjugorje Message, March 18, 2012 – The annual apparition of Our Lady to Mirjana Dragicevic-Soldo

“Dear children! I am coming among you because I desire to be your mother – your intercessor. I desire to be the bond between you and the Heavenly Father – your mediatrix. I desire to take you by the hand and to walk with you in the battle against the impure spirit. My children, consecrate yourselves to me completely. I will take your lives into my motherly hands and I will teach them peace and love, and then I will give them over to my Son. I am asking of you to pray and fast because only in this way will you know how to witness my Son in the right way through my motherly heart. Pray for your shepherds that, united in my Son, they can always joyfully proclaim the Word of God. Thank you. ”

“The Fifth and Final Dogma”

We are all privileged to be living during the climax of the universally designated “Age of Mary”. International Marian Centres such as Lourdes, Fatima and places of contemporary apparition, as well as numerous other contemporary Marian movements manifest the present climax of love and devotion to the Mother of Jesus throughout the world.

But along with a climax in devotion to Our Lady, this Age of Mary is also crucially calling for a climax in the doctrine about Mary. For authentic love of Mary must be firmly based upon the authentic truth about Mary.

Up to the present time in the history of the church, four Marian doctrines have been defined as central Catholic truths by the Church: the Motherhood of God, the Immaculate Conception, the Perpetual Virginity of Mary, and her Glorious Assumption into heaven. It is now time for the church, at the summit of this Marian era, to proclaim and define the fifth and final Marian doctrine, that is, Mary’s universal mediation as Coredemptrix, Mediatrix of all grace, and advocate for the people of God.

When the Church invokes Mary under the title, “Coredemptrix”, she means that Mary uniquely participated in the redemption of the human family by Jesus Christ, Our Lord and Saviour. At the Annunciation (cf.Lk.1:38) Mary freely cooperated in giving the Second Person of the Trinity his human body which is the very instrument of redemption, as Scripture tells us: “We have been sanctified through the offering of the body of Jesus Christ once for all” (Heb.10:10).

And at the foot of the cross of our Saviour (Jn.19:26), Mary’s intense sufferings, united with those of her Son, as Pope John Paul II tells us, were, “also a contribution to the Redemption of us all” (Salvifici Doloris, n.25). Because of this intimate sharing in the redemption accomplished by the Lord, the Mother of the Redeemer is uniquely and rightly referred to by Pope John Paul II and the Church as the “Coredemptrix.”

Secondly, Mary is invoked in the Church under the title Mediatrix of all grace. All the graces which flow from the redemption of Jesus Christ are granted to the human family through the motherly intercession of Mary. Mary mediated Jesus Christ, the Author of all graces, to the world when she agreed to be the human mother of God made man (cf. Lk 1:38). And from the cross at Calvary (Jn 19:26) and as the final gift to humanity, Jesus gives Mary as a spiritual mother to us all: “Son, behold your mother” (cf. Jn 19:26). For this reason, Vatican II refers to Mary as a “mother to us in the order of grace ” (Lumen Gentium, n. 62) and several twentieth century popes have officially taught the doctrine of Mary as Mediatrix of all graces, quoting the words of St Bernard: “It is the will of God that we obtain all favours through Mary.” The Mediatrix performs this task in intimate union with the Holy Spirit, the Sanctifier, with whom she began the drama of our Lord’s Redemption at the Annunciation (cf. Lk. 1:35).

Thirdly, Mary is our Advocate for people of God, in that she takes the petitions of her earthly children, especially in times of difficulties, and brings them through her maternal intercession before her Son and our Lord Jesus.

The universal mediation of the Mother of Jesus as Coredemptrix, Mediatrix of all graces, and Advocate for the people of God is already contained in the official and authoritative teachings of the Church’s Magisterium. Now, at the summit of the Marian era, what remains is the final proclamation by the Church of this final Marian doctrine as Christian dogma revealed by God.

Dr. Mark Miravalle, Associate Professor of Theology and Mariology at the Franciscan University of Steubenville, has written the book, Mary: Coredemptrix, Mediatrix, Advocate. This work theologically expounds these roles of Mary in Scripture, Apostolic Tradition, and the teachings of the Church’s Magisterium, and humbly calls for our Holy Father, Pope John Paul II, to proclaim and define the universal mediation of Mary as Coredemptrix, Mediatrix, and Advocate as “Christian dogma revealed by God, in rightful veneration of the Mother of Jesus, and for the good of the one, holy, Catholic, and apostolic Church of Christ”. Cardinal Luigi Ciappi, O.P., who served as Papal Theologian for every pope from Pius XII to John Paul II, has written the foreword in strong endorsement of this work, and himself asserts, quoting the call for papal definition of Mary, Coredemptrix, Mediatrix, and Advocate, “I share the hope of Dr. Mark Miravalle”. 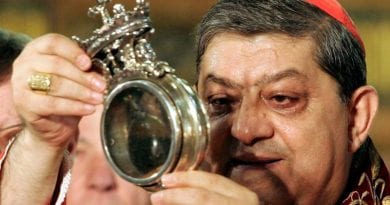 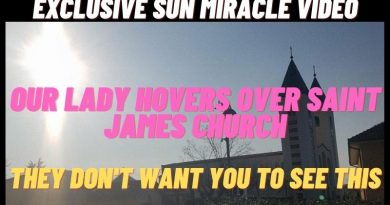 Medjugorje Exclusive: Our Lady Hovers Over Saint James Church – They Don’t Want you to See THIS 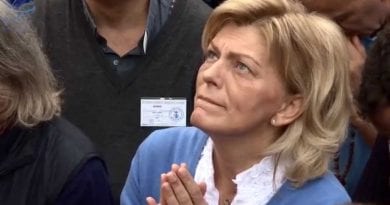 “Dear children, my beloved Son always prayed and glorified the Heavenly Father. He always said everything to Him and trusted

What did he do and why did his parishioners call Father Jozo the new Moses? Not only for his dedication