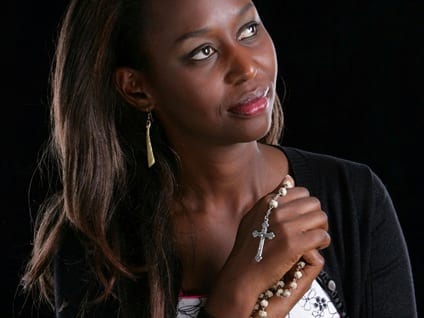 “Too many people treat their neighbors dishonestly. The world is full of hatred. You know my Second Coming is at hand when you see the outbreak of religious wars. Then, know that I am on the way.” Jesus to Visionary

In 2003, the Church formally recognized a series of Marian apparitions that occurred between 1981 and 1983 in the town of Kibeho in the Diocese of Gikongoro in the southwest of Rwanda.

The Kibeho apparitions are well known for prophesying the genocide that occurred in that country in the spring of 1991.

The Virgin Mary know as “The Mother of the Word” said in 1981  “if the world does not retun back to God there would be a river of blood.”  Sadly the prophecy came true and over 1,000,000 people were killed in three months – this horrible tragedy represents the greatest loss of life in the history of the world over such a short period of time.

Haunting Messages from the Virgin Mary

“When I show myself to someone and talk to them, I want to turn to the whole order ativan online cheap world. If I am now turning to the parish of Kibeho it does not mean I am only concerned for Kibeho or for the Diocese of Butare, or for Rwanda, or for the whole of Africa. I am concerned with and am turning to the whole world.” The Mother of the Word This rarely  seen trailer presents the first 10 minutes of the Catholic Radio TV Network  documentary  – “Kibeho Here, three people, Nathalie Mukamazimpaka, Alphonsine Mumureke and Claire Mukangango, received messages from Our Lady. During the 1994 massacres, 20,000 Tutsi were murdered in Kibeho, and Kibeho’s population dropped from 58,000 to less than 20,000. Kibeho’s percentage of Catholics also dropped from 83% to 49%.

From The Miracle Hunter

Rwanda consists mainly of two tribes: the Hutus and the Tutsis. They have been at conflict with each other for long years. The 1990 uprising between the two tribes resulted in the deaths of close to 900,000 before it was all over. Rwanda had an estimated 65% of it’s population Catholic in 1981. This is when the Blessed Virgin Mary began her apparitions in Rwanda with warnings for the world. The apparitions were to six girls and a boy. Their names were as follows: Alphonsine Mumureke, Anathalie Mukamazimpaka, Stephanie Mukamurenzi, Marie-Claire Mukangango, Agnes Kamagaju, Vestine Salina and Emmanuel Segastasha. The first apparition happened to Alphonsine Mumureke,  a sixteen year old, at Kibeho College. The beautiful lady looked to be about twenty five years old and wore a white dress with a white veil. Alphonsine fell to her knees, “Who are you?” “I am the Mother of the Word.” The Blessed Virgin asked her: “Of the religions, what do you like?” Alphonsine replied, “I love God and His Mother who has given us Their Son who has saved us.” The Blessed Virgin replied: “It is true. I have come to assure you of this. I have heard your prayers. I would like it if your companions had more faith because some of them do not believe enough.” Alphonsine’s apparitions continued till the end of November. During her apparitions Alphonsine would sometimes cry and other times laugh. When the apparitions were over Alphonsine would faint from exhaustion. Throughout the apparitions Mary asked Alphonsine and the others to prepare the world for the return of her Son. Her message was one of prayer, fasting and conversion. She told us we should all be ready for our deaths and the end of the world. Each of the children were given a prophetic messages about what was to take place and gave them messages for all of the world. One of the apparitions was extremely terrifying and Alphonsine dropped to her knees seven times and begged the Virgin in tears, “On the day you will come to call your children, have mercy on us!” In March of 1983 the Virgin appeared to Marie-Clarie and told her that her messages were meant for everyone: “When I show myself to someone and talk to them, I want to turn to the whole world. If I am now turning to the parish of Kibeho it does not mean I am only concerned for Kibeho or for the Diocese of Butare, or for Rwanda, or for the whole of Africa. I am concerned with and am turning to the whole world.” The Blessed Virgin also appeared to Stephanie Mukamurenzi and told her: “We must be converted, we must pray and mortify ourselves. Satan tries to ruin us. God wants our prayers from the heart.”“We must remain humble and available. Let us learn to pray from the heart.” In June of that same year the Blessed Virgin appeared to Agnes Kamagaju and told her about the way women were using their bodies (Africa is rampant with AIDS): “They [young girls] should not use their bodies as an instrument of pleasure. They are using all means to love and be loved and they forget that true love comes from God. Instead of being at the service of God, they are at the service of money. They must make of their body an instrument destined to the glory of God and not an object of pleasure at the service of men. They should pray to Mary to show them the right way to God.”“I have come to prepare the way for my Son for your good and you do not want to understand. The time remaining is short and you are absent-minded. You are distracted by the goods of this world which are passing…..Do not forget that God is more powerful than all the evil in the world. Tell the youth not to spoil they future by the wrong way of living, which can weigh heavily on their future. Don’t lose Heaven for the world. The intellectuals have received learning to help others arrive at the truth, which is God. To profess atheism is to insult and mock God….” The Blessed Virgin’s other messages consisted of: “[Seek] detachment from the good of this world and search for the good prepared by God.”“The walk to heaven is through a narrow road. It is not easy to get through. The road to Satan is wide. You will go fast, you will run because there are no obstacles.”“There isn’t much time left for preparing for the Last Judgment. We must change our lives, renounce sin. Pray and prepare for our death and for the end of the world. We must prepare while there is still time. Those who do well will go to Heaven. If they do evil, they will condemn themselves with no hope of appeal. Do not lose time in doing good and praying. There is not much time and Jesus will come.” Jesus Christ also appeared in Rwanda to Emmanuel Segastasha, in the bright figure of a black man. He was wearing African clothes and was shrouded in light. The fifteen year old boy was returning from school at the time when he heard an inner voice ask him: “Child, if you receive a mission, will you be able to accomplish it?” Emmanuel responded “yes” in his heart. Jesus told the boy that we needed to stop sinning and come back to the sacraments especially Penance. “Often we say that we are weak, but God has given us the sacraments of reconciliation.”“I am neither black nor white. I am simply the Lord.”“To many people treat their neighbors dishonestly. The world is full of hatred. You know my Second Coming is at hand when you see the outbreak of religious wars. Then, know that I am on the way.”“There’s not much time to prepare for the Last Judgment.”