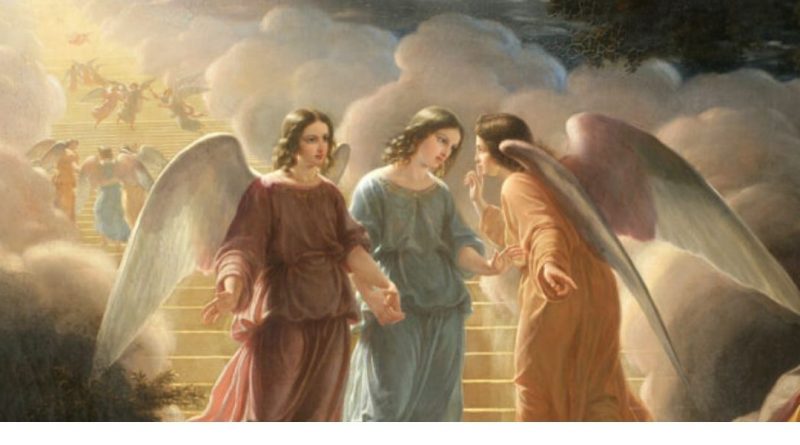 Secrets of the Spiritual Realm: 12 Angelic Facts Every Christian Must Know.

“Be sober-minded; be watchful. Your adversary the devil prowls around like a roaring lion, seeking someone to devour.” – 1 Peter 5.8.

Are humans alone in the universe as intelligent beings? The Catholic Church has always believed and taught that the answer is no: the universe is in fact filled with many kinds of intelligent, other-worldly beings that we call ANGELS. And they are up to all sorts of amazing things!

Here are 12 important things for all Christians to know about these mysterious beings from another realm:
1) Angels are absolutely real.
Angels are not just a pious fiction or a superstition: they are absolutely, positively real – as real as you and me and anything else. They are actively involved in our world and play a crucial role in human history. (CCC 328).

2) Every Christian has a guardian angel.
The Catechism quotes St. Basil saying “Beside each believer stands an angel as protector and shepherd leading him to life.” (CCC 336).

3) Demons are also very real.
All angels were originally created good, but some angels made a choice to disobey God. These fallen angels are called “demons.” Hell was originally prepared as a place for demons. (CCC 391ff; Matthew 25.41).

4) There is a dramatic spiritual war going on for human souls.

The choice to fall away from God was irrevocable for demons. But humans, at least as long as they are alive on earth, still have a choice. Angels and demons are engaged at this moment in a dramatic spiritual war, battling to influence human souls either toward or away from God.
Satan tempted Adam and Eve in the Garden of Eden, and demons continue to tempt human beings away from God today. (CCC 391ff)

5) St. Michael the Archangel is the leader of the Lord’s angelic armies.St. Michael is a faithful angel who leads good angels in spiritual battle against fallen ones. His name literally means “Who is like God?,” which represents his faithfulness to God when other angels rebelled. (cf. Revelation 12.7).

6) Satan is a leader of the fallen angels.
Like all demons, he was originally a good angel who chose to turn away from God. As a creature, he remains finite and subject to God’s providence. (CCC 391, 395).In the Gospels, Jesus resisted Satan’s temptations (Matthew 4, Luke 4), called him the “father of lies,” a “murderer from the beginning” (John 8.44), and said Satan came only to “steal and kill and destroy” (John 10.10).

7) Any involvement with the occult or demonic forces is gravely sinful.
Demonic forces are nothing but evil and humans should have nothing to do with them. Any involvement in the occult – whether it be divination, horoscopes, clairvoyance, mediums, etc – even if with “good” or “innocent” intentions, is gravely sinful and highly dangerous. (CCC 2116-2117).

8) Exorcism remains an active practice of the Church.
In the Gospels, Christ and his Apostles regularly make explicit battle against demons, often exorcizing them from possessed individuals. The Church continues this act of spiritual warfare for the good of souls.

A minor exorcism is included in the baptismal rite. In the case of demonic possession, priests with special permission from their bishop can perform solemn exorcisms. (CCC 1237, 1673, 550).

9) We can also engage in spiritual battle through prayer and other spiritual practices.
The Our Father prayer, given by Christ himself, includes a request to “deliver us from evil.” The Church also encourages the use of the Prayer to Saint Michael. Written by Pope Leo XIII, it calls for the final imprisonment of Satan to hell.
Fasting has also been traditionally used as a spiritual weapon.
But the best way to aid the fight against demonic forces is to simply live a holy life following after Christ.
10) Many saints have engaged in explicit, even physical, battles with demons.

Beating them up, appearing as terrifying beasts, making dreadful sounds, even setting things on fire; you can read the incredible stories of St. Anthony the Great, St. Padre Pio, St. Gemma Galgani, St. John Vianney, and St. Teresa of Avila.

11) Satan was definitively defeated by Christ.

In his passion, death, and resurrection, Jesus definitively defeated the powers of Satan. This fact is progressively manifested in the history of the Church until the Second Coming of Christ. (cf. CCC 550).

12) Christ is the King of the whole angelic world.

Jesus Christ is the King of the Universe, and that includes the spiritual realm. Angels were created by Christ at the beginning of the world to be his servants. Even demons, who have chosen to disobey God, ultimately remain under the control of God’s providence. (CCC 331).