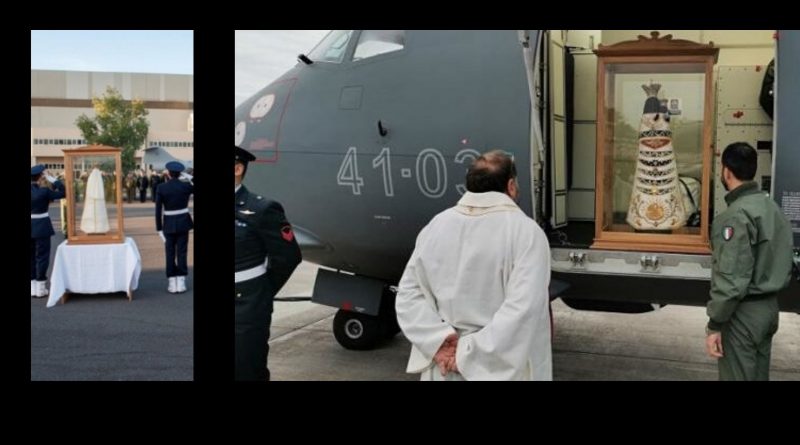 Italy, a deeply catholic nation, is falling back to catholic traditions in her battle against the novel coronavirus, and this time, the Air Force is helping.

Italian Air Force is flying a statute of Mary over the airspace of Italy in their efforts to combat the virus that has hit the European country the hardest, making it the second to China in terms of infections and deaths.

The Italian Air Force has deep ties with Mary, the catholic symbolism of the earthly mother of Jesus Christ. The Virgin of Loreto, one of many names attributed to the Virgin Mary, is the Patron Saint of the Air Force. And they have annual events to renew their devotion to her.

So it appears this time, Italy is finally turning back to the Virgin Mary for protection. The Catholic church has at least 7 invocations to invite Mary at the hour of need.

In videos that have been shared on social media, a statute of what they believe to be the virgin Mary and baby Jesus are seen to be given military protection and escort as they are loaded onto planes that fly over Italy. A Catholic Church priest is in charge of the process chanting invocations to call on Mary.

Little is known if Mary has responded, but Italy as of today remains to be the most heavily hit country in Europe from the coronavirus.

And it came to pass at noon, that Elijah mocked them, and said, Cry aloud: for he is a god; either he is talking, or he is pursuing, or he is in a journey, or peradventure he sleepeth, and must be awaked. And they cried aloud, and cut themselves after their manner with knives and lancets, till the blood gushed out upon them. And it came to pass, when midday was past, and they prophesied until the time of the offering of the evening sacrifice, that there was neither voice, nor any to answer, nor any that regarded. 1 Kings 18:27-9

This is understandable in catholic doctrines. Mary is as powerful as Jesus.

“No one ever finds Christ but with and through Mary. Whoever seeks Christ apart from Mary seeks Him in vain.” St. Bonaventure

Russian President Vladimir Putin in 2015. Reuters Russia says it would consider any US move to curb the operations of