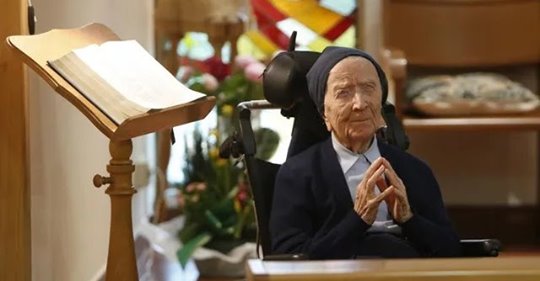 Sister André, is the oldest person in Europe, and she recently turned 116

She attends Holy Mass everyday with her religious order, the same of St. Catherine de Laboure which is called  the Daughters of Charity of St. Vincent de Paul,the same Sisters serving at the Casa Santa Marta in the Vatican for 98 years.

During this little ceremony, children sang religious songs around Sister André, now blind, was seated in her wheelchair.
“I saw beautiful things, and I saw very sad things. Children who were abandoned because there was nothing to feed them, and children who were taken in by families. It “was also very beautiful to see. Beautiful things happened, sad things happened too,” said Randon to reporters.

Her best memory? The end of the First World War, “when my two brothers returned. It was rare, in families, there were rather two dead than two alive. They both returned.”

Born in Alès (Gard), in a non-practicing Protestant family, the only girl surrounded by three brothers, Sister André was governess in several families, in Paris and in the provinces. She was baptized at 26 but entered orders relatively late, at 41, in the company of the Daughters of Charity of St. Vincent de Paul. Assigned to a hospital in Vichy (Allier), she stayed there for 31 years, before leaving for Savoy. 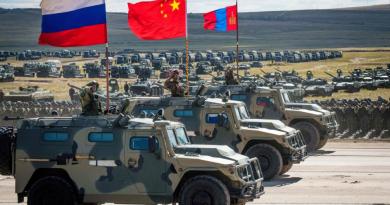 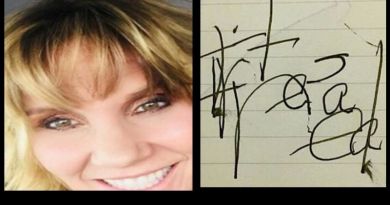 Mirjana: “The triumph of the Immaculate Heart of Mary will take place through the priests!”… “Priests need our protection more than ever, because they are surely the first target of satan!”

Exorcist: Satan’s Open Spiritual Warfare in America: “Prince of this World has been almost completely unleashed..Satan is Unmasked and Angry”.

BREAKING: Statue of Virgin Mary decapitated by vandals on Sunday Morning in Toronto

Sr. Lucia’s Little Known Prophecy “THE TWO LAST REMEDIES FROM GOD” …”Russia will be the instrument of chastisement chosen by Heaven to punish the whole world….the devil is engaged in a decisive battle.”