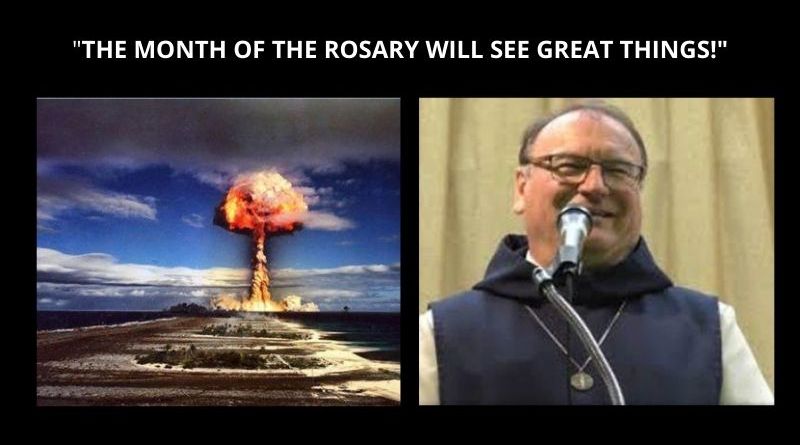 We of course know that the ‘month of the Rosary’ is October, and he adds that ‘..great events of purification will begin this fall’.

In what would seem to be a preparation for what Fr. Michel warns of to occur this fall, in another letter to his supporters dated March 24, 2020 he writes the following:
“….After this period of compulsory confinement [due to virus outbreak -editor], life will resume its course. The summer period will open a window of time where we will be able to prepare well for the coming test … that of being with Jesus on the Cross. We cannot see the Glorious Cross without encountering the cross with Jesus.

You must now consecrate your house or apartment to the Eternal Father through the Sacred Heart of Jesus and Mary if you have not done so. We must regularly bless our places, our homes, with exorcised holy water. During this summer, you need to prepare a food supply for a period of three months, with drinking water, too. You will need to have made your general confession before fall. The prayer of the Holy Rosary, of Saint Michael the Archangel, and that of your guardian angels will be your comfort, your strength, your protection.”

Economic collapse, Revolution, Martial law and World War III?
Along with a global ‘Purification’ that Fr. Rodrigue says will begin this Fall 2020, he also foresees the following:
“…There will be famine. Jesus presented this to me just recently. I was in my room, and when I sat down, preparing to go to bed, I saw a black cavalier coming. This means famine. I heard, “They will have money, but they will have no bread,” which means that you can have money to buy it, but you will find nothing.

“Then all money will crash, so it is good to give your money away now, as it will disappear. There will be a great uprising. You will see revolution in your streets. People will fight each other openly. The government will have no other choice than to institute martial law. At the same time that martial law begins, so will the war.

And here is more on the “war” that Fr. Michel was purportedly shown:
“He [the devil -editor] will start a nuclear war that will be global—the third world war—his war against all of humanity. The devil will kill one third of humanity in this war, and through plagues and abortion, just as one third of the angels were cast out of heaven into hell. Seven nuclear missiles will be permitted to strike the United States as a result of its abominations. Many nuclear missiles will be deflected by the Hand of God because America prays the Divine Mercy Chaplet. I was told this by the Eternal Father.

“…And I know that the war will come from two countries: One is Korea and the other is Iran. They will come together to face the United States of America.”

“Fighting against each other for Political reasons”
And elsewhere he states:
“The times are urgent. The Tribulation will come, and it will be soon. We are in a time of emergency. When the Father gave me the fraternity, He asked me to build it quickly because it will be a refuge for many priests who will come there. Much of what you will witness will be orchestrated by the devil. You will see people fighting against each other for a political reasons. The persecution of Christians, which has already begun, person to person through ridicule and accusation, will come from laws that are lawlessness. You will not be able to follow these laws in good conscience, so persecution will then fall under civil authority.”

The world wide Warning/Illumination of conscience
The following is some of Fr. Michel Rodrigue’s explanations concerning the Warning:
“…..Then the Warning will come. I saw this. The stars, the sun, and the moon will not shine. All will be black. Suddenly in the heavens, a sign of Jesus will appear and light up the sky and the world. He will be on the Cross, not in His suffering, but in His glory. Behind Him in a pale light, we will appear the face of the Father, the True God. It will be something, I assure you.

From the wounds in Jesus’ hands, feet, and side, bright rays of love and mercy will fall onto the entire Earth, and everything will stop. If you are in an airplane, it will stop. If you are riding in a car, don’t worry—the car will stop. If you ask me, “How can that be?” I will say, “God is God. He is the Father Almighty, Creator of heaven and Earth. If He put Fr. Michel out in there the universe, like a piece of dust, do you think He cannot stop matter? Do you believe that your small airplane will bother Him? No. This is what God told me; but He has also told such things to others, like at Garabandal, which St. Padre Pio believed in.

Everything will be fixed in time, and the flame of the Holy Spirit will enlighten every conscience on Earth. The shining rays from Jesus’ wounds will pierce every heart, like tongues of fire, and we will see ourselves as if in a mirror in front of us. We will see our souls, how precious they are to the Father, and the evil within each person will be revealed to us. It will be one of the greatest signs given to the world since the Resurrection of Jesus Christ.”

Elsewhere Fr. Michel has stated:
“After the Warning, no one left on Earth will be able to say that God does not exist. When the Warning comes, everyone will recognize Christ, and they will also recognize His Body, and the body of Christ is the Catholic Church.

“…After the illumination of conscience, humanity will be granted an unparalleled gift: a period of repentance lasting about six and a half weeks when the devil will not have the power to act. This means all human beings will have their complete free will to make a decision for or against the Lord.

“…When the devil returns after six and a half weeks, he will disseminate a message to the world through the media, cell phones, TV’s, et cetera. The message is this: A collective illusion happened on this date. Our scientists have analyzed this and found it occurred at the same time that a solar flare from the sun was released into the universe. It was so powerful that it affected the minds of the people on Earth, giving everyone a collective illusion.

“The devil fools us even now through the new priests of the world: television journalists who want you to think what they think, so they present only the news that is their opinion. They twist the truth and you are hypnotized, manipulated into believing them.”

A time of Refuges
Fr. Michel also speaks of a time after the Warning\Illumination of conscience where those who repent of their sins and have chosen God will be led to “Refuges”, which are special places throughout the world that are set aside by God, and have been created by people who were called to do so beforehand, somewhat like Noah and the Ark for example–an we are in times like that of the great Flood, where sadly much of the world is corrupted by sin.

“….After the six and half weeks following the Warning, when the devil’s influence returns, you will see a little flame in front of you, if you are called to go to a refuge. This will be your guardian angel who shows this flame to you. And your guardian angel will advise you and guide you. In front of your eyes, you will see a flame that will guide you where to go. Follow this flame of love. He will conduct you to a refuge from the Father.

“All of the refuges will be connected together. People in each refuge will be chosen as messengers. They will be declared in each refuge with this gift. They will be taken by the Holy Spirit to go and help, connecting with other refuges so that people will know what is happening everywhere. If you are in need, the messengers will know what to do. They will be like Philip in the Acts of the Apostles. You remember in the Bible when Philip, the apostle, went to the eunuch and baptized him, and immediately afterward, the Holy Spirit took Philip away and put him in another place? It will be exactly the same. So we will need no phones, nothing like that. Communication will be in the way of the Holy Spirit.”

“The Father told me that when people enter a refuge, many will be healed of major illnesses so as to not be a burden to others. You will still suffer from normal aches and pains because you are human and not in heaven yet, just in a refuge. Everyone will be there willingly, knowing that the blessing of the Lord is upon them.

For three and half years, you will be in your refuge or in your home consecrated as a refuge, but you will not be sad not to go out. You will be happy to be there because of what you will see is happening outside.”

Father Michel Rodrigue has also spoke of other matters, which space does not permit here. Those interested can read more at the ‘Virtual retreat’ here and/or watch his retreats on YouTube. 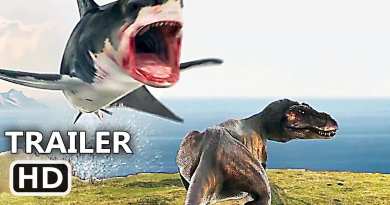 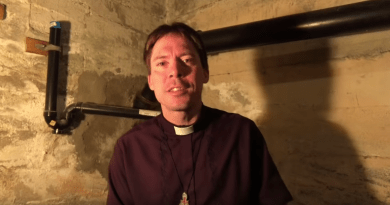 “If men only knew what eternity is, they would do everything in their power to change their lives.” Deeply rooted