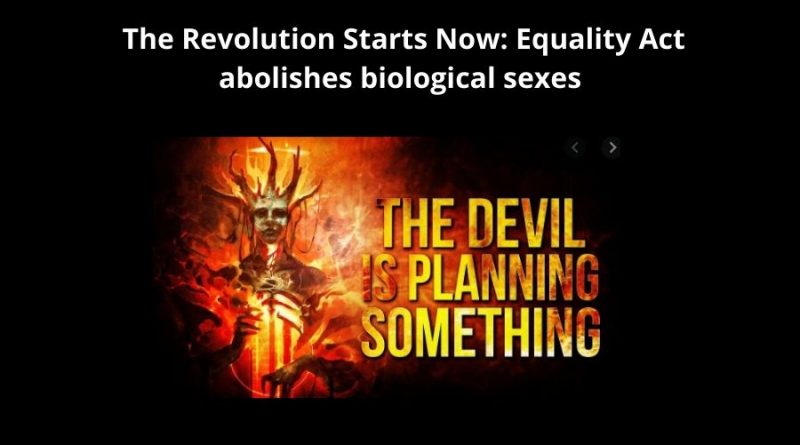 “Dear children, At this time, I am calling you to return to God and to prayer. Invoke the help of all the saints, for them to be an example and a help to you. Satan is strong and is fighting to draw all the more hearts to himself. He wants war and hatred. That is why I am with you for this long, to lead you to the way of salvation, to Him who is the Way, the Truth and the Life. Little children, return to the love for God and He will be your strength and refuge. Thank you for having responded to my call. ”

Joe Biden and the Democrats are poised to pass the most radical piece of legislation in history. That’s right: The most sweeping, transformative and radical law in human history is on the brink of being enacted—unless the American people stand up and demand it be defeated.

On Friday, Biden demanded that Congress “swiftly pass” the Equality Act, also known as H.R. 5, which would obliterate the legal recognition of biological sexes. The very concept of male and female, man and woman, would be abolished and declared “discriminatory” and “oppressive” under this bill. It is not just a fundamental assault on reality, but human nature itself.

The Equality Act does more than designate the “LGBTQ+” community as a “protected class,” shielding them from discrimination in housing and employment. Rather, its goal is totalitarian: To impose transgender ideology upon American life, society and culture, opening a Pandora’s Box that will have devastating consequences. It is a hammer that will be used to persecute other groups—especially, women and girls. Call it Biden’s “War on Women.”

The bill would enable any man or boy who “identifies as female” to go into any women’s restroom, locker room, showering facilities or compete on a women’s sports team (including elementary, high school, college and professional athletics). It eviscerates Title IX, even enabling transgendered men to claim scholarships and federal funding set aside for female student athletes. Women’s sports will be destroyed as stronger, faster and more muscular men, identifying as “female,” will be allowed to compete.

More ominously, it will be legal for transgendered men to disrobe and expose themselves naked in women’s showers, locker rooms and gym restrooms. It violates and undermines the equality, safety and privacy of women and girls everywhere. Which begs the question: Where are the feminists?

In fact, this legislative monstrosity—in the name of “equality”—privileges men who claim to be female over everyone else, trampling on women’s rights, parental rights, free speech, religious freedom and the rights of medical experts and professionals. For example, under H.R. 5, it would be illegal and criminal for parents to refuse their 8-year-old child if he or she wants to take puberty blockers or begin hormone replacement therapy. This would be considered “transphobic bigotry,” potentially resulting in the parents losing custody of their child or suffering some other form of punishment.

Doctors and medical experts who oppose or disagree with having children take puberty blockers or undergo hormone therapy, because of its severe (and possibly permanent) emotional, psychological and physical consequences, would lose their licenses to practice medicine. Hence, medical experts would have to choose: violate the Hippocratic Oath (and their moral conscience) and obey the dictates of this insane law or have their careers destroyed.

Moreover, the Equality Act would turn Pope Francis into a criminal, the equivalent of a grand wizard of the Ku Klux Klan who wishes to uphold the Jim Crow segregationist system. The bill specifically exempts itself from the Religious Freedom Restoration Act, thereby allowing the federal government to sanction and punish any religious institution, faith-based group or church that believes in basic biology and biblical teachings on sex and marriage.

Every major religion—Christianity, Judaism, Islam, Hinduism, Buddhism—under this bill would be engaging in “discrimination” and “oppression” against the transgender community. Why? Because they champion the belief that the differences between men and women are real, that the male and female sexes are rooted in biological reality and grounded in God’s natural design for humanity. This is the very opposite of “transhumanism” or transgender ideology, which argues that gender or biological sex is a “social construct,” and not real; rather, they are a tool of social oppression and human repression that must be dismantled. The Equality Act codifies transgender ideology, which is a form of cultural Marxism.

The Democrats want to subsume everyone else’s rights to those of the LGBT community. This is progressive authoritarianism. It is a war against the family, reality, Christianity, the Bible, Western civilization and ultimately, God.

It is also profoundly anti-science. Human anatomy is defined by the differences in the two sexes. Females have two X chromosomes (XX), while males have one X chromosome and one Y chromosome (XY). The entire animal kingdom is also divided between the male and female sexes. In short, the Equality Act—and by extension, transgenderism—seeks to subvert and overturn the most basic truth of society: God created both man and woman. Even the communists—Lenin, Stalin, Mao—and the fascists—Hitler, Mussolini—never sought to eradicate the biological sexes. This is how insane (and deranged) liberals have become.

Biden claims to be a Catholic. It is high time the Catholic Church broke its silence. She must speak out against this totalitarian assault on American society before it’s too late. And if necessary the Church should deliver a public ultimatum to Biden: withdraw your support or face excommunication. Mortal enemies will no longer be tolerated 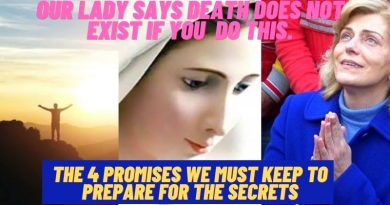 “The Flame of Love”…The Prayer that Blinds Satan…Jesus: “This prayer is an instrument”

Vicka Reveals information on “Indestructible sign”: “I know when the permanent sign will be revealed. I know this with precision”

Father Gabriele Amorth was famous for being known as the “Vatican’s Exorcist”. Movies of his life have been made and