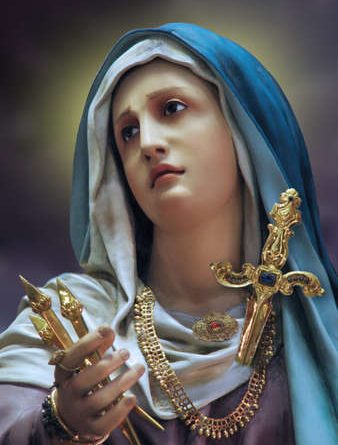 On the Maltese Islands on Friday before the Good Friday we celebrate the Feast of Our Lady of Sorrows. In fact, this day serves as a good preparation for the celebration of the Holy Week.

Even if this year we were not able to celebrate it however the feast suggests a strong resource of spirituality. On this day, at the school of Mary, we contemplate value of suffering. The Mother of God too had to undergo immense suffering. She was the first one to live the direct effects of Jesus words when he said in the Lukan Gospel: But before all this they will lay their hands on you and persecute you, delivering you up to the synagogues and prisons, and you will be brought before kings and governors for my name’s sake. This will be a time for you to bear testimony. Settle it therefore in your minds, not to meditate beforehand how to answer; for I will give you a mouth and wisdom, which none of your adversaries will be able to withstand or contradict. You will be delivered up even by parents and brothers and kinsmen and friends, and some of you they will put to death; you will be hated by all for my name’s sake. But not a hair of your head will perish. By your endurance you will gain your lives (Luke 21:12-19).

Mary is also the first disciple who receives the blessing Jesus accords to those who are persecuted for his sake. In the Matthean Gospel Jesus promises: Blessed are those who are persecuted for righteousness’ sake, for theirs is the kingdom of heaven. “Blessed are you when men revile you and persecute you and utter all kinds of evil against you falsely on my account. Rejoice and be glad, for your reward is great in heaven, for so men persecuted the prophets who were before you (Matt 5:10-12).

St Alphonsus Ligouri, in his book The Glories of Mary, delves deeper into the seven sorrows of Mary. He composed them into the form of a chaplet on the same style as the scriptural rosary. Moreover, in every meditation on each and every sorrow of Mary Liguori inserts many quotes from the saints, theologians and other holy men and women. Thus, his chaplet gets a very enriching Marian flavour.

The 1st Sorrow of Our Lady:  The Prophecy of Simeon.

The 2nd Sorrow of Our Lady: The Cold Flight into Egypt.

The 3rd Sorrow of Our Lady:  The Loss of the Child Jesus in the Temple.

The 4th Sorrow of Our Lady:  Our Lady Meets Jesus on the Way to Cavalry.

The 5th Sorrow of Our Lady:  Jesus Dies on the Cross.

The 6th Sorrow of Our Lady:  The Piercing of the Side of Jesus and Descent from the Cross.

The 7th Sorrow of Our Lady:  The Burial of Jesus.

Another valuable resource with personally found it helpful is the sermon by Saint Bernard of Clairvaux when he comments on Mary’s presence on the Calvary by the Cross of her Son Jesus. In this sermon, which we read on the liturgical feast day of Our Lady of Sorrows on September 15 there are some theological and spiritual aspects which touched my heart.

First, the martyrdom of the Virgin Mary is to be found in the prophecy of Simeon at the temple. Second, Mary received her martyrdom even after Jesus died on the Cross. The case in point is the cruel spear which transfixed Jesus’ side, who was dead. But Mary witnessed all this cruelty in silence. Third, Mary is a martyr in spirit. She took John, a man, a servant, who takes the place of Jesus, the Son of God, God himself, the Master of everyone and everything.

Or were those words, Woman, behold your Son, not more than a word to you, truly piercing your heart, cutting through to the division between soul and spirit? What an exchange! John is given to you in place of Jesus, the servant in place of the Lord, the disciple in place of the master; the son of Zebedee replaces the Son of God, a mere man replaces God himself. How could these words not pierce your most loving heart, when the mere remembrance of them breaks ours, hearts of iron and stone though they are!

The martyrdom of the Virgin is set forth both in the prophecy of Simeon and in the actual story of our Lord’s passion. The holy old man said of the infant Jesus: He has been established as a sign which will be contradicted. He went on to say to Mary: And your own heart will be pierced by a sword.

Truly, O blessed Mother, a sword has pierced your heart. For only by passing through your heart could the sword enter the flesh of your Son. Indeed, after your Jesus – who belongs to everyone, but is especially yours – gave up his life, the cruel spear, which was not withheld from his lifeless body, tore open his side. Clearly it did not touch his soul and could not harm him, but it did pierce your heart. For surely his soul was no longer there, but yours could not be torn away. Thus the violence of sorrow has cut through your heart, and we rightly call you more than martyr, since the effect of compassion in you has gone beyond the endurance of physical suffering.

Or were those words, Woman, behold your Son, not more than a word to you, truly piercing your heart, cutting through to the division between soul and spirit? What an exchange! John is given to you in place of Jesus, the servant in place of the Lord, the disciple in place of the master; the son of Zebedee replaces the Son of God, a mere man replaces God himself. How could these words not pierce your most loving heart, when the mere remembrance of them breaks ours, hearts of iron and stone though they are!

Do not be surprised, brothers, that Mary is said to be a martyr in spirit. Let him be surprised who does not remember the words of Paul, that one of the greatest crimes of the Gentiles was that they were without love. That was far from the heart of Mary; let it be far from her servants.

Perhaps someone will say: “Had she not known before that he would not die?” Undoubtedly. “Did she not expect him to rise again at once?” Surely. “And still she grieved over her crucified Son?” Intensely. Who are you and what is the source of your wisdom that you are more surprised at the compassion of Mary than at the passion of Mary’s Son? For if he could die in body, could she not die with him in spirit? He died in body through a love greater than anyone had known. She died in spirit through a love unlike any other since his.

What does it mean for you the Feast of Our Lady of Sorrows? What does it tell you of Mary’s love for you? Do you believe that she is present and accompanying you when you are sorrowful and suffering any kind of persecution for Christ’s sake?