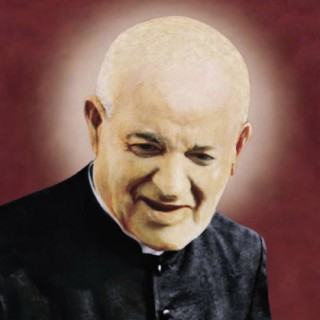 On Sunday May 9, 2021, the Church in Malta gladly celebrated the great feast of one of her courageous and forward looking sons, the diocesan priest Saint George Preca. But who was this charismatic priest whose abundant good fruit can still be felt not only in Malta but everywhere the Maltese went?

Saint George Preca was born in Valletta, Malta’s capital city, on Thursday 12 February 1880. He was the 7th child in a very numerous family of 9 children. In his childhood his family decided to transfer itself to another neighbour town, precisely 4.2 kilometres away, by the name of Ħamrun. It is in this town that George not only was to spend the rest of his earthly life but also realize God’s special calling for him. As most children would do at the time he attended both the primary and secondary school till the age of 16. In those years, George felt the inner calling to dedicate his life to God as a priest. Hence, moved by such a great love for Christ he entered the seminary of Malta where he studied theology. He was ordained a priest on Saturday 22 December 1906.

Saint George Preca underwent the same experience which many saints did, namely that of having a call within a call. In fact, while still in the seminary, the young George would frequently offer to his fellow companions words of wisdom, most particularly a phrase which his spiritual director and confessor, Dun Alwiġ Galea, had taught him: “God has chosen you to teach his people”. George took these words so seriously that he made it a point to evangelize all those whom Divine Providence put on his life path.

In those days Catholic Malta suffered alot from strong catechetical instruction. The Christians of those days were not appropriately catechized. Hence, guided by God’s Spirit, Fr George Preca started meeting a group of lay young people to delve deeper into God’ Word with them. During their meetings he talked to them regarding matters that interested them. His deep influence of these young people, especially on a young Dockyard worker, by the name of Eugenio Borg, was so great that Borg was to become his life-long companion in the foundation of the Society of Christian Doctrine (SDC).  Consequently, on Thursday 7 March 1907, a small house was rented to serve as the first Society’s centre. Then, the Society grew so much throughout the many parishes of Malta.

Upon witnessing this impressive phenomenon within her ranks, the Church, as a caring mother, simply could not ignore her responsibility of verifying if this charism really came from God or was merely a human enthusiastic initiative. After years of rigorous inquiry she came to the positive conclusion that the Society of Christian Doctrine was God’s work. However she proposed that small changes had to be implemented to the basic rules of the Society. This important development led to the official recognition of the Society of Christian Doctrine which was now canonically approved for the respective dioceses of Malta and Gozo thanks to the Benedictine Bishop of Malta at the time, Dom Mauro Caruana OSB.

For Fr George Preca being totally involved in and within the Society of Christian Doctrine practically meant consuming his priestly life for the sake of evangelization. Besides fulfilling his priestly duties in Saint Cajetan parish in Ħamrun he would almost daily visit different centres of the SDC throughout Malta so as to talk to the children, young people and members alike. Frequent were the occasions when Saint George would also do talks to the people in the open air.

Countless number of people were greatly impacted by his holy and charismatic presence. On the example of the Good Shepherd, Fr George Preca magnificently responded to the serious lack of preparation in the Christian faith by consolidating his fellow brothers and sisters’ faith through catechetical teaching. In his speeches in the streets and squares, always packed with people hungry for the solid food of the faith (1 Cor 3:2), Saint George would emphasize on his great favourite themes such as ‘The aim of man’, ‘Right intention of our actions’ and ‘Forgiveness’. Furthermore, and as a caring spiritual father would do, Saint George found time to converse with those who frequently wanted to talk to him concerning their personal matters in order that he might give them some light from above.

Like Saint Paul, Malta’s first father in faith, Saint George wrote extensively. His devotion to the apostolate of writing can be detected in his over a hundred publications regarding several spiritual and theological issues which he would either have published and sold at cost prices or even given out freely to people. Some of his publications like The Great book and The Sanctuary of Christ’s Spirit, are certainly Preca’s spiritual masterpieces.

Saint George Preca went to the Father’s House on Thursday 26 July 1962 after 82 years of extremely fruitful apostolic life. In his beatification, which occurred on the Maltese soil, on Wednesday 9 May 2001, Saint Pope John Paul II gave a very rich depiction of who Saint George Preca really was. In his moving homily at the “Granaries” of Floriana, on his last step of his Jubilee Pilgrimage on the example of Saint Paul on his way to Rome, the place of his martyrdom, this great holy Polish Pope said:

“Since his death in 1962, shortly before the opening of the Second Vatican Council, Blessed George Preca has been renowned for his holiness both in Malta and wherever the Maltese have settled. Dun Gorg was a pioneer in the field of catechetics and in promoting the role of the laity in the apostolate, which the Council was to stress in a particular way. Thus he became as it were Malta’s second father in faith. Embracing meekness and humility, and using to the full his God-given talents of mind and heart, Dun Gorg made his own the words of Paul to Timothy: ‘You have heard everything that I teach in public; hand it on to reliable people so that they in turn will be able to teach others’ (2 Tim 2: 2). The Society of Christian Doctrine which he founded continues his work of witness and evangelization in these islands and elsewhere.

Not far from here the young seminarian Gorg Preca heard the prophetic words of a priestly mentor: ‘Gorg, when you grow up many who fear God will gather around you. You will be a blessing for them and they for you’. Today the Church in Malta calls Gorg Preca ‘Blessed’, for she knows that he is for her a native source of light and strength. In his writings on meekness – his book L-Iskola tal-Manswetudni and his Letter – Dun Gorg urges his fellow Christians to follow the example of the Crucified Lord in forgiving every offence (cf. Lk 23:34). Is not this message of mutual respect and forgiveness especially needed today in Malta and in the world? Yes indeed, the meekness of the Beatitudes has the power to transform the family, the workplace and schools, the towns and villages, politics and culture. It can change the world! ‘Blessed are the meek, for they shall inherit the earth’ (Mt 5:5).

Magister, utinam sequatur evangelium universus mundus (Divine Teacher, may the whole world follow the Gospel): the prayer of Blessed Dun Gorg perfectly mirrors the missionary mandate of the Lord: ‘Go therefore and make disciples … teaching them to observe all that I have commanded you’! (Mt 28:19-20). During the year of the Great Jubilee the whole Church experienced anew the eternal freshness of the loving mercy of the Father who sent his only Son for our salvation. Was it not Dun Gorg’s ability to communicate the freshness of the Christian message that made him the great apostle that he was? Is this not what Malta needs today: clergy, religious, catechists, teachers who passionately proclaim the Good News of what the Father has done for us in Christ? At the dawn of a new millennium, the Church looks to you, Malta, to be still more ardent in living your apostolic and missionary vocation! The whole Church looks to you!” (no.3).

Blessed George Preca was officially canonised on Sunday 3rd June 2007, at Saint Peter’s Square in Rome, by Pope Emeritus Benedict XVI. Here is a beautiful reflection on the first Maltese canonized saint which Pope Ratzinger left to us:

“George Preca, born in La Valletta on the Island of Malta, was a friend of Jesus and a witness to the holiness that derives from him. He was a priest totally dedicated to evangelization: by his preaching, his writings, his spiritual direction and the administration of the sacraments and, first and foremost, by the example of his life.

The Johannine expression, ‘Verbum caro factum est’  always directed his soul and his work and thus the Lord could make use of him to give life to a praiseworthy institution, the ‘Society of Christian Doctrine’, whose purpose is to guarantee parishes the qualified service of properly trained and generous catechists. As a profoundly priestly and mystical soul, he poured himself out in effusions of love for God, Jesus, the Virgin Mary and the saints. He liked to repeat: ‘Lord God, how obliged to you I am! Thank you, Lord God, and forgive me, Lord God!’ This is a prayer that we can also repeat and make our own. May St George Preca help the Church, in Malta and throughout the world, to be always a faithful echo of the voice of Christ, the Incarnate Word.” 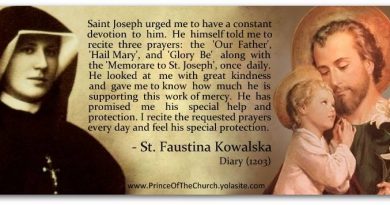 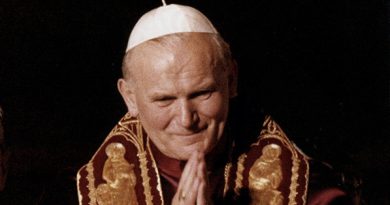 St John Paul II, a great teacher of the road to holiness 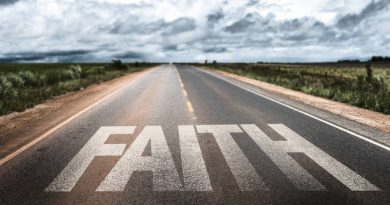 Our Lady at Medjugorje is the new morning star who brings us great graces. She is the bearer of true

Medjugorje Today: The Permanent Sign Will Convert the Church to Recognize Our Lady at Medjugorje… One Seer will still have daily apparitions