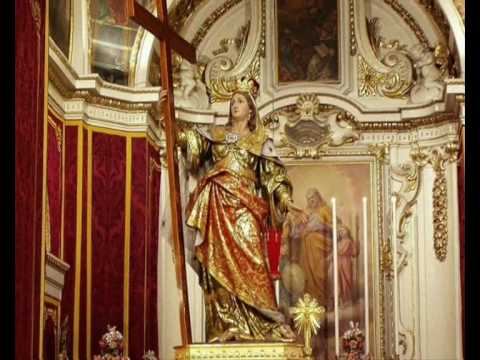 On Monday 3 2021, we celebrated the feast of the Invention of the Cross. On this occasion we celebrated the feast when, according to the Christian tradition, the True Cross was discovered (from the Latin inventio, meaning “discovery”), in 326 by St Helena, the mother of the Roman Emperor Constantine the Great, during that famous pilgrimage she undertook to Jerusalem. The Church of the Holy Sepulcher was later built at the very site of the discovery of the Cross by the direct order of Helena and Constantine.

It is said that one-third of the Cross remained in Jerusalem, one-third was brought over to Rome and put in the Sessorian basilica Santa Croce in Gerusalemme (Holy Cross in Jerusalem) whereas one-third was sent to Constantinople in order to render the city invincible.

The great Church historian Eusebius of Cesarea describes St Helena as having true Christian zeal for Christ. It was precisely this holy zeal which motivated her to find Christ’s Cross:

Especially abundant were the gifts she bestowed on the naked and unprotected poor. To some she gave money, to others an ample supply of clothing; she liberated some from imprisonment, or from the bitter servitude of the mines; others she delivered from unjust oppression, and others again, she restored from exile. While, however, her character derived luster from such deeds … , she was far from neglecting personal piety toward God. She might be seen continually frequenting His Church, while at the same time she adorned the houses of prayer with splendid offerings, not overlooking the churches of the smallest cities. In short, this admirable woman was to be seen, in simple and modest attire, mingling with the crowd of worshipers, and testifying her devotion to God by a uniform course of pious conduct (The Life of Constantine, XLIV, XLV).

Traditions refer to the holy cross as being found lying between two crosses with an inscription (John Chrysostom, Hom. In Joh. 75:1, PG 59, 461) whereas others, concerning of course of the authenticity of the cross, they recount that only the Cross of Christ was able vrified by its ability to cure a sick woman (e.g., Rufinus, Hist. Eccles. 10:7–8). A further step towards to the exact location where Christ’s Cross was found was marvelously carried during recent archaeological researches. In fact these manifest that the traditional place where the Cross was supposed to have been found, at the Cave of the Invention of the Cross in the Church of the Holy Sepulchre, was noneother than a subterranean cavity that was converted into a cistern no earlier than the 11th century.

How beautiful is the prayer St Macarius prayed before the woman was put on the three crosses found on the Golgotha to detect the One on whom Our Saviour gave his life for us! Tyrannius Rufinus, the famous Italian monk and historian, provides us with the following St Macarius prayer:

O Lord, who by the Passion of Thine only Son on the cross, didst deign to restore salvation to mankind, and who even now hast inspired thy handmaid Helena to seek for the blessed wood to which the author of our salvation was nailed, show clearly which it was, among the three crosses, that was raised for Thy glory. Distinguish it from those which only served for a common execution. Let this woman who is now expiring return from death’s door as soon as she is touched by the wood of salvation.

On the other hand, the Liturgy of the hours gives us, as the second reading for the feast day, an extraordinary excerpt from a discourse by St Andrew of Crete on the Exaltation of the Holy Cross.

We are celebrating the feast of the cross which drove away darkness and brought in the light. As we keep this feast, we are lifted up with the crucified Christ, leaving behind us earth and sin so that we may gain the things above. So great and outstanding a possession is the cross that he who wins it has won a treasure. Rightly could I call this treasure the fairest of all fair things and the costliest, in fact as well as in name, for on it and through it and for its sake the riches of salvation that had been lost were restored to us.

Had there been no cross, Christ could not have been crucified. Had there been no cross, life itself could not have been nailed to the tree. And if life had not been nailed to it, there would be no streams of immortality pouring from Christ’s side, blood and water for the world’s cleansing. The legal bond of our sin would not be cancelled, we should not have attained our freedom, we should not have enjoyed the fruit of the tree of life and the gates of paradise would not stand open. Had there been no cross, death would not have been trodden underfoot, nor hell despoiled. Therefore, the cross is something wonderfully great and honourable. It is great because through the cross the many noble acts of Christ found their consummation – very many indeed, for both his miracles and his sufferings were fully rewarded with victory. The cross is honourable because it is both the sign of God’s suffering and the trophy of his victory. It stands for his suffering because on it he freely suffered unto death. But it is also his trophy because it was the means by which the devil was wounded and death conquered; the barred gates of hell were smashed, and the cross became the one common salvation of the whole world.

The cross is called Christ’s glory; it is saluted as his triumph. We recognise it as the cup he longed to drink and the climax of the sufferings he endured for our sake. As to the cross being Christ’s glory, listen to his words: Now is the Son of Man glorified, and in him God is glorified, and God will glorify him at once. And again: Father, glorify me with the glory I had with you before the world came to be. And once more: “Father, glorify your name”. Then a voice came from heaven: “I have glorified it and will glorify it again”. Here he speaks of the glory that would accrue to him through the cross. And if you would understand that the cross is Christ’s triumph, hear what he himself also said: When I am lifted up, then I will draw all men to myself.’ Now you can see that the cross is Christ’s glory and triumph.

Most High glorious God, enlighten the darkness of my heart. Give me right faith, sure hope and perfect charity. Fill me with understanding and knowledge that I may fulfill your command. Amen.

Why don’t we start our days with this simple yet profound prayer before the Crucifix? 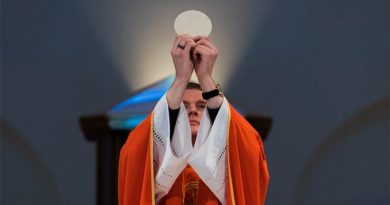 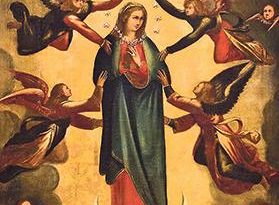 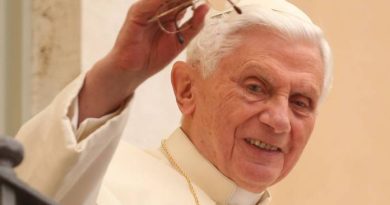 SOURCE DNZYC A glitzy copper box containing two lead vials with what Catholics believe is the 2,000-year-old blood of Jesus

Posted Originally at Aleteia.org “Equal to the Apostles” First Witness of the Resurrection (First Century) Her life + Mary of

Pilgrimage to Medjugorje August 27th – September 5th, 2019 “A spiritual journey of a lifetime”