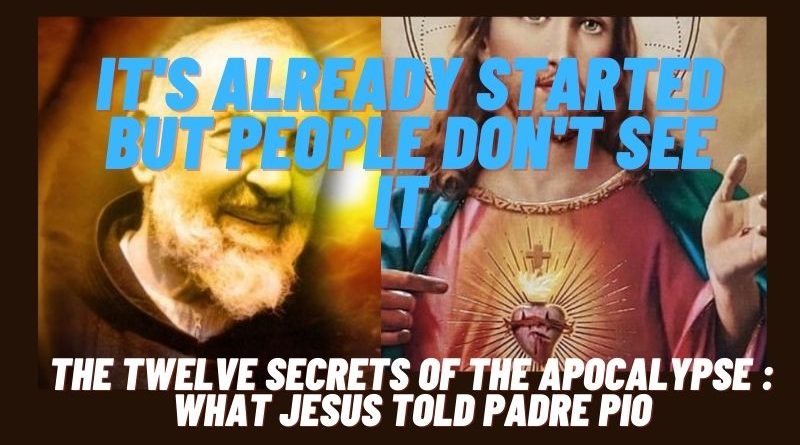 Signs of the arrival: The Twelve Secrets of the Apocalypse. Jesus Tells Padre Pio that the ‘World is Walking into Ruins.
Men have abandoned the right path. Not many know that Padre Pio, among so many spiritual gifts, had a very special one, that of prophecy, and the Lord Jesus Christ himself communicated with him. In a letter of 1959 addressed to his superior, Padre Pio tells the revelation that Jesus made about the World’s End.

1. The world is walking into ruins. Men have abandoned the right path to venture on roads that end in the desert of violence. If they do not drink from the source of humility, charity and love, it will be a catastrophe.
2. Terrible things will come. I can no longer intercede for men. Divine piety is about to end. Man had been created to love life, and ended up destroying life. 3. When the world was entrusted to man, it was a garden. Man has turned it into an atmosphere full of poisons. Nothing now serves to purify the house of man. A deep work is necessary, which can only come from heaven. 4. Prepare to live three days in total darkness. This will be known as The Three Days of Darkness. And during these tragic days the people will seem dead without eating or drinking. Then the light will return. 5. Many people will escape scared and they will run without a goal. They will say that there is salvation to the east and people will run to the east, but they will fall off a cliff. They will say that to the west there is salvation and people will run to the west, but they will fall into a furnace.

6. The earth will tremble and the panic will be great. The Earth is sick. The earthquake will be like a snake, they will feel it crawling everywhere. And many stones will fall. And many men will perish. 7. You are like ants, because the time will come when men will take their eyes off for a crumb of bread. Businesses will be looted, warehouses will be taken in assault and destroyed. The poor will be the ones who in those dark days will be without a candles, without a jug of water and without the necessary items for three months.
8. A land will disappear … a great land. A country will be erased forever from geographical maps … And with it history, wealth and men will be dragged into the mud.

9. The love of man for his fellow man has become an empty word. How can you expect Jesus to love you, if you do not even love those who eat at their own table? Of the wrath of God men of science will not be forgiven, but men of heart will receive salvation.
10. I’m desperate.I do not know what to do for humanity to repent. If you continue on this path, the tremendous wrath of God will be unleashed like a tremendous thunderbolt.

11. A meteorite will fall on the earth and everything will shine. It will be a disaster, much worse than a war. Many things will be canceled. And this will be one of the signs. 12. Men will live a tragic experience. Many will be overwhelmed by the river, many will be burned by fire, many will be buried by poisons … But I will stay close to the pure of heart. Be attentive, because the Lord will come like a thief in the night. God Bless and Thank you for watching

Fr. Rodrigue and the Shocking future of the Church and the world …”Satan is going to attack”