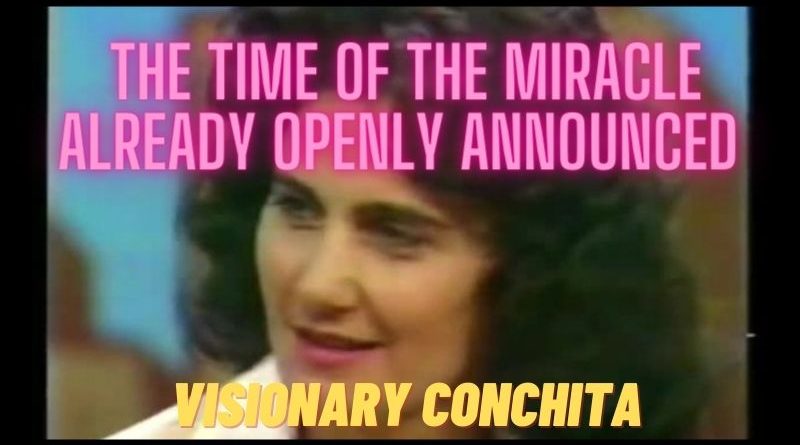 One of the most extraordinary aspects to the Garabandal apparitions that took place in the early 1960s is that the visionary, Conchita Gonzales, has openly announced the specific time certain prophecies for the world will begin to unfold.

She says it will begin on a Thursday at 8:30 p.m. at the pines near Garabandaal. She also made statements regarding the specific dates of the events. Conchita said  the miracles will begin :

1.  At the time of a feast of a saint, martyr of the Eucharist.”

2. “It will take place either during March, April, or May.” and

3 “It will take place on or between the eighth and the sixteenth.” The specific prophecies that have been openly announced by Conchita make the Spanish apparitions a unique event in Catholic history that have now been a mystery for many decades.   But before the news of the specific dates that would reveal when  the “Warning” and the three prophecies would take place, Conchita received two messages from the Blessed Mother.

The first one was given  on October 16, 1961. Our Lady said: “We must make many sacrifices, perform much penance, and visit the Blessed Sacrament frequently. But first, we must lead good lives. If we do not, a chastisement will befall us. The cup is already filling up, and if we do not change, a very great chastisement will come upon us.

Then a second message on June 18, 1965 was released which contained dire consequences for humanity: Our Lady said,  “As my message of October 18 has not been complied with and has not been made known to the world, I am advising you that this is the last one. Before, the cup was filling up. Now it is flowing over. Many cardinals, many bishops and many priests are on the road to perdition and are taking many souls with them. Less and less importance is being given to the Eucharist.

You should turn the wrath of God away from yourselves by your efforts. If you ask His forgiveness with sincere hearts, He will pardon you. You are now receiving the last warning. I, your mother, through the intercessions of Saint Michael the Archangel, ask you to amend your lives. I love you very much and do not want your condemnation. Pray to us with sincerity and we will grant you requests. You should make more sacrifices. Think about the Passion of Jesus.
After
the two messages
and near the end of Our Lady’s apparitions with  Conchita, the Blessed Mother gave the visionary information about the future of the world. This information,  over time, became known as “The Warning” . The warning contained three prophecies. The worldwide Warning from God will be seen and then felt interiorly by everyone on Earth. This world-wide event will be known as the Illumination of conscience. At that moment we will see the wrong we’ve done and the good we failed to do. “The Warning” will be sent to correct the conscience of the world and prepare it for the first prophecy which is known as the  “Great Miracle”.

The Miracle will take place at the grove of pine trees on a bluff overlooking the village . It will occur on a Thursday evening at 8:30 on or between the eighth and the sixteenth of March, April, or May. Conchita knows the date and will announce it eight days in advance. All those either in the village or on the surrounding mountains will see it. The sick who are present will be cured, sinners converted, and the incredulous will believe. As a result of the Miracle, Russia will be converted.

The second prophecy is described as the Great Sign:
After the Miracle, a permanent visible supernatural sign will appear and remain at the pines until the end of time.

After the Miracle, then God will send the Great Chastisement. The “chastisement” is  known as the third prophecy.

The Great Chastisement’s arrival  will be a very serious event for humanity if the world still does not change. The three prophecies are serious events for the world and have gotten a great deal of publicity, even major movies have been made about the apparitions in Spain.

Because of this the visionaries have been subjected to intense investigations including medical examinations. After Conchita and the visionaries were carefully examined by leading doctors they truly believed in the authenticity of the seers, saying: “To keep silent would be true scientific cowardice… we do not find any convincing explanation for such phenomena.”

The Catholic Church has not issued an official position on the extraordinary events that took place in Spain in the 1960’s. The world waits and wonders. Our Lady is calling you. God Bless, Ave Maria. 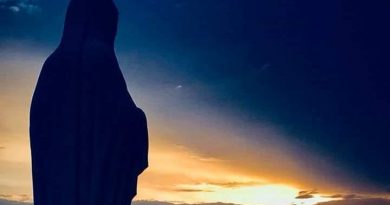 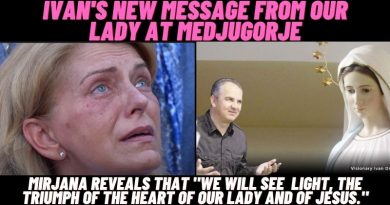 Medjugorje Today – New Message from The Queen of Peace to Ivan November 8, 2021 – Mirjana: “We will see the triumph of the heart of Our Lady and of Jesus”

MEDJUGORJE: “I KNOW THE EXACT DATE OF THE FIRST SECRET” WHY IS NOBODY TALKING ABOUT THIS

During the  Convocation at Liberty University,  Caviezel described the moment when God called him to be an actor at age