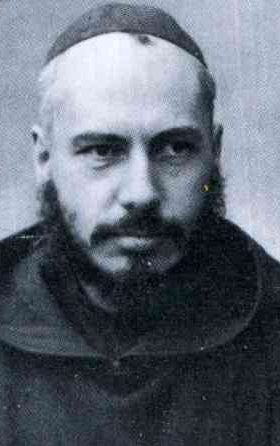 In his address to the participants in the 28th course on the internal forum sponsored by the Apostolic Penitentiary on Friday 17 March 2017 Pope Francis said:  The confessor, in fact, is called daily to the “peripheries of evil and of sin” — this is a terrible periphery! — and his work represents an authentic pastoral priority. Hearing confessions is a pastoral priority. Please, let there be no such signs as: “Confessions heard only on Mondays and Wednesdays from a certain time to a certain time”. Hear confession every time you are asked. And if you are there [in the confessional] praying, keep the confessional open, as God’s heart is open. These powerful and life-changing words have made themselves evidently manifest in the holy life of the great Capuchin confessor Padre Giacomo da Balduina.

But who was this zealous apostle of God’s mercy in the confessional? Named as Beniamino Angelo, he was the eighth child out of ten children. Giacomo was born on August 2, 1900, in the vicinity of Padua, in the Veneto region, in northern Italy. Beniamino’s father provided for the livelihood of the family thanks to his managing of the huge agricultural estates which appertained to a certain Baron Ugo Treves. His mother Guiseppina was the real soul of the family. Under her care Beniamino had a peaceful childhood in the cheerful milieu of his family. Thanks to his mother’s merciful example the little child started learning to help others heartily. He always preferred to make his brothers and sisters happy rather than himself.

Since he was a child Beniamino was struck by the religious ceremonies which were celebrated at the close-by parish. His family attended to these ceremonies with great faith. His admiration for the solemn way the priests celebrated the mass left an indelible mark on him. In fact, he immediately learned to serve Mass. His love for the celebration of the Eucharistic Sacrifice went beyond the church building. It is said that at home Beniamino set up a tiny parish composed of local children. He used to “celebrate” Mass on an altar which Francesco, his older brother, made for him. Not only that but he would use his mother’s aprons to serve him as his liturgical vestments. Considering that he did not have a proper pulpit the young Beniamino use to stand on a chair and from it he delivered his homilies.  Beniamino celebrated solemn funerals to lay dead animals to rest. Furthermore he solemnly celebrated “the weddings” of his playmates.

These innocent games were the logical continuity of his spiritual life, which, later on in his life, found its strong expression in the retreat of personal prayer as well as the diligent priestly service at the altar. Beniamino was confirmed at the age of ten whereas at eleven years of age he made his First Holy Communion.

If in my child or the child of my friends I notice these “priestly games” do I ridicule him or do I start praying for him? Do I encourage him and draw attention to his parents that, may be, this child has a priestly or a consecrated life vocation?

Our Lady of Beauraing is the last Marian apparition to have the approval of Rome. It is very wise to