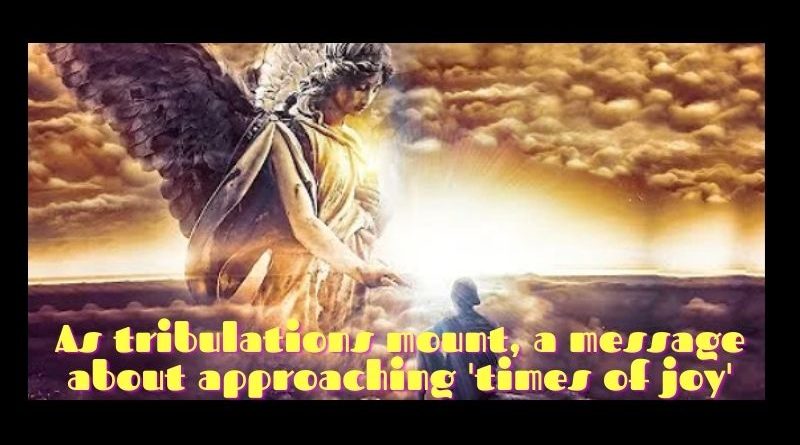 AS THE world marked the birthday of the Blessed Virgin Mary last September 8 (although the Blessed Mother was reported to have told Medjugorje visionaries that she was born August 5), she told mystic Gisella Cardia of “times of joy approaching.” Now, that’s a comforting relief from the barrage of recent mystic messages warning of “long years” of tribulation.

Before sharing with readers the entire message that will clarify the context of the joyful news, a brief on Gisella (although I did introduce her already in one of my past columns), reputed to be a Marian visionary from Trevignano Romano in Italy.

The messages up to 2018 were later published in two volumes, as compiled by Edizioni Segno. A Polish translation of the second volume got a nihil obstat from a Polish archbishop, amid reports that her own bishop based in Civita Castellana has always been supportive of her.

Now here’s the message of the Blessed Mother to Gisella on September 8, 2021:

“My dearly beloved little children, for you, too, today is a time of joy on the anniversary of my birth, but if I were to say to you, ‘I wish each one of you my children eternal rest,’ I can already see the gloom on your faces because you are used to reciting this prayer for your deceased loved ones.

“No, little children, I am not wishing you death but life, true life, where joy rules. My dearly beloved little children, you yourselves want rest; in each one of you I can see so much tiredness. You always want well-deserved rest, therefore I wish you that rest which is joyful but full of all the beauty and goodness that true life can offer you.

“My dearly beloved children, the times of your joy are approaching. Pray that the Father might send you the Son and myself in order to begin a life that is totally full of joy. You can see how the times in which you are living are becoming increasingly difficult and painful for all of you – young and not so young.

“Pray, I say to you, so that your Father in Heaven might shorten these bad times and finally give you joy, happiness, tranquillity, goodness, and everything that can make you savor true love.

“You can only have joy when peace reigns among you; then you will be able to say, ‘Today, I can finally savor true joy,’ that joy which Satan has denied you until now.

“Little children, I love you. A little longer and then true joy will come for you. I bless you. Help me to regain many of my children with your prayers and sacrifices. May love and joy always be with you.” (End of quote.)

In her other messages, however, the Blessed Mother said that mankind has yet to pass through “long years” of tribulations which, by the account of some mystics, have already commenced.

What’s happening in our day brings to mind what Archbishop Carlo Maria Viganò of Ulpiana and former Apostolic Nuncio to the United States of America, who wrote to former US president Donald Trump on October 25, 2020. The letter shows Vigano’s awareness of the shadows now controlling in growing magnitude what’s happening to the world.

Let me share some excerpts from his letter to Trump as follows:

“Allow me to address you at this hour in which the fate of the whole world is being threatened by a global conspiracy against God and humanity.

“A global plan called the Great Reset is underway. Its architect is a global élite that wants to subdue all of humanity, imposing coercive measures with which to drastically limit individual freedoms and those of entire populations. In several nations this plan has already been approved and financed; in others it is still in an early stage. Behind the world leaders who are the accomplices and executors of this infernal project, there are unscrupulous characters who finance the World Economic Forum and Event 201, promoting their agenda

“The purpose of the Great Reset is the imposition of a health dictatorship aiming at the imposition of liberticidal measures, hidden behind tempting promises of ensuring a universal income and canceling individual debt. The price of these concessions from the International Monetary Fund will be the renunciation of private property and adherence to a program of vaccination against Covid-19 and Covid-21 promoted by Bill Gates with the collaboration of the main pharmaceutical groups. Beyond the enormous economic interests that motivate the promoters of the Great Reset, the imposition of the vaccination will be accompanied by the requirement of a health passport and a digital ID, with the consequent contact tracing of the population of the entire world.

“Those who do not accept these measures will be confined in detention camps or placed under house arrest, and all their assets will be confiscated…

“Mr. President, I imagine that you are already aware that in some countries the Great Reset will be activated between the end of this year and the first trimester of 2021. For this purpose, further lockdowns are planned, which will be officially justified by a supposed second and third wave of the pandemic…

“You are well aware of the means that have been deployed to sow panic and legitimize draconian limitations on individual liberties, artfully provoking a worldwide economic crisis. In the intentions of its architects, this crisis will serve to make the recourse of nations to the Great Reset irreversible, thereby giving the final blow to a world whose existence and very memory they want to completely cancel…

“Many people — as we well know — are annoyed by this reference to the clash between Good and Evil and the use of ‘apocalyptic’ overtones, which according to them exasperates spirits and sharpens divisions. It is not surprising that the enemy is angered at being discovered just when he believes he has reached the citadel he seeks to conquer undisturbed. What is surprising, however, is that there is no one to sound the alarm. The reaction of the deep state to those who denounce its plan is broken and incoherent, but understandable. Just when the complicity of the mainstream media had succeeded in making the transition to the New World Order almost painless and unnoticed, all sorts of deceptions, scandals and crimes are coming to light…

“Until a few months ago, it was easy to smear as ‘conspiracy theorists’ those who denounced these terrible plans, which we now see being carried out down to the smallest detail. No one, up until last February, would ever have thought that, in all of our cities, citizens would be arrested simply for wanting to walk down the street, to breathe, to want to keep their business open, to want to go to church on Sunday. Yet now it is happening all over the world…

“And while the politicians are barricaded inside their palaces promulgating decrees like Persian satraps, businesses are failing, shops are closing, and people are prevented from living, traveling, working, and praying…”

And so the years of tribulations roll on. Let us pray… even more, always.