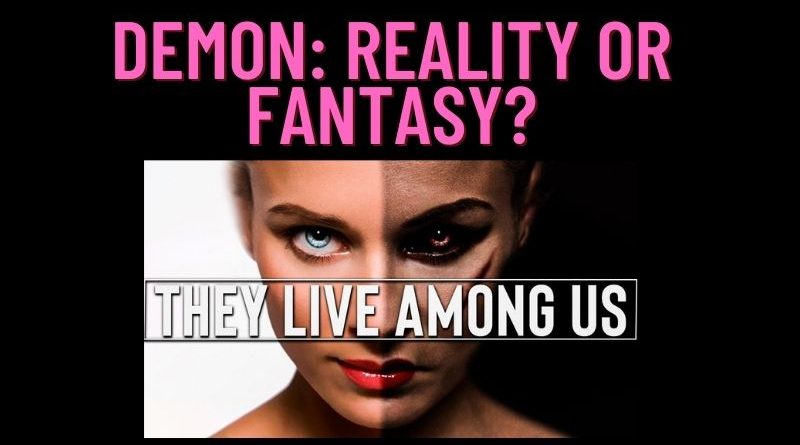 We believe there are Demons.

The tests are many and they are serious:

– The Holy Bible speaks of the Devil hundreds of times, from the third chapter of Genesis (temptation of Adam and Eve), to the last chapters of the Apocalypse.

In the New Testament, especially in the Holy Gospel, the Devil is expressly spoken of as a spiritual, real, alive, malefic being on many occasions.

– The tradition of the Church leaves no gaps and doubts in this regard. It is a truth of faith that even Paul VI, in his splendid “Act of Faith” of June 1968, clearly wished to recall, and so did Pope John Paul II, speaking to young people about the Salesian Works.

– The biographies of the ancient and modern Saints and the testimonies of the Fathers and Masters of the spirit and of people rich in wisdom and holiness of our time, affirm the great, tragic importance of the Devil in the spiritual life.

– All peoples, both historically and geographically considered, believe in the existence of evil spirits.

– The so-called “science”, proud and superficial, leaves little room for the presence of God in the world and even less leaves to Satan.

However, it should not be confused with true Science which is the individual and collective attempt to discover the veils that still cover reality, in its laws and in its whys. While materialistic science and philosophy favors, by reaction, superstition which finds good ground in religious ignorance, authentic science now makes room, at least as a hypothesis, for the possibility of superhuman interference in human behavior.

– It would be too convenient to abolish the Devil, as if it were our fantasy, with the only means of our not wanting to think about it, of our personal antipathy. Some, naive or satanically proud theological opinions … would like to abolish the chapter of the Angels and even more so that of the Devils and Hell.

You don’t defend yourself against an angry mutt by simply laughing in their face, or by hiding your face in your hands.

Where is the Devil

Being a spiritual person, without a body, as we humans have, the Devil cannot be located in this or that place, as if it were a bandit or a poisonous snake.

Sacred Scripture says that Lucifer and his satellites, for having rebelled against God, were precipitated towards Hell. In this fall of theirs which (let us never forget!) Takes place out of time, they are similar to unconscious climbers who are plunging into the abyss.

They cling to the air, the sea, the earth, human beings, to delay the hour when they will be forever locked up in the fire of Hell, prepared for the Devil and his Angels. They are already damned, but they are as the Apocalypse makes us think, still among us, as they are among us, for opposite reasons,

They have, in their pride, rejected the happiness, the truth, the limitless love of Heaven, opting for the despair, the darkness and the implacable hatred of a way of life without hope, with all sorts of evil, without any good. .

The Devil therefore, while remaining in his infernal situation, can bring harmful influence on human beings and things, with the aim of damaging us materially and spiritually, distancing us from God and wrapping us in his coils.

Unfortunately the Devil is not a legendary dragon, a prisoner of the abyss: he is a cunning and invisible being who walks beside us. I am writing this not for the much that I have studied, but for the little, almost daily, however, that I have had to experience.
How many Demons are there? The Lord knows.

From the Bible it seems that it is an endless number of the order of millions or billions, even if the figure is clearly lower than that of the Angels who remained faithful to God.
They are also divided into groups that resemble the nine angelic choirs.
The higher their position in the celestial hierarchy, the more terrible is the torture to which they are condemned. The greater their holiness, the stronger their hatred and the greater the possibility they have to harm.
There is no bond of love and understanding between them, yet they are closely united by irreducible hatred of God and envy of men.
They are called by various names, which I think are synonymous: “devils, demons, evil spirits, angels of darkness, etc.” “. Other names, perhaps, refer to well-determined people, such as Lucifer, Beelzebub, Satan (who would be according to some, the three rebellious Seraphim to whom they correspond, in Heaven, Saint Michael, Saint Gabriel and Saint Raphael). Against a human person and an institution (family, Church, State, etc.), there can also be many devils who, helping each other, rage. Complete victory and liberation is when all have been cast out.

In this battle, trust in the good and almighty God is the first condition to win, or rather, to take part in the victory already won by our Lord Jesus.

We must avoid the wrong mentality of those who consider the following more or less on the same level: ” Prince of Darkness “and the” Sun of Justice “. Jesus is true Man and true God. And between the infinite power of Jesus and the fragility of the infernal world, the abyss is unbridgeable.
Lucifer, even if united with the millions of rebellious Angels, with the already damned, with those men who are subjected to them and with all the human structures he has managed to take over, in the face of the Omnipotence of God, remains weaker and more foolish. of a gnat that wants to pounce on the sun.

Even knowing that we are participating in a battle against an invisible and close enemy, in a kind of insidious guerrilla warfare against supernatural powers, we must have and instill serenity. Provided that we proceed in humility, that is, in good company and with suitable weapons.

Source Papaboys 3.0 Translated by Google from Italian Some reflections of the best known visionary Vicka of Medjugorje.  And we

Medjugorje Today May 1, 2021 (NEW VIDEO) Vicka “Satan is a tireless seducer” Here is how to stop him