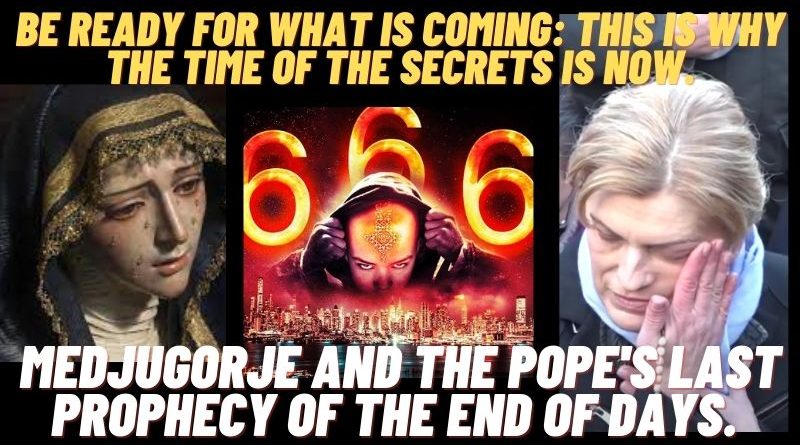 Precisely in 2020, the year in which the world began to experience its own fragility and the deception of false freedom, Pope Benedict XVI Emeritus, in his last book, points out to the whole world the identity of the Antichrist. He says the spirit of the anti-Christ will have two fundamental characteristics: false humanism and social exclusion of those who do not submit to it.

What few people are aware of is, Our Lady at Medjugorje, in the early days of the apparitions, revealed a prophecy to the visionaries that speaks precisely to Pope Emeritus’ description of the spirit of the anti-Christ, a spirit that is now beginning to rule the world. She said this would be the sign of the times.

In 1981 Our Lady revealed this astonishing prophecy.

She said “The West (including the United States) will make civilization progress but without God and will act like their own creators.”

Theologians describe this prophecy as a warning that the spirit of the antichrist will emerge from the “West” and that the reign of modern technology and the dominance of a false humanism will be the sign of its arrival.

Can there be any doubt that we have reached that point in the world?
Our Celestial Mother told the visionary Mirjana: “Go on the streets of the city, count those who glorify God and those who offend Him. God can no longer endure that.

In an historical homily on July 3, 2020 in Medjugorje Father Ivan Dugandizic spoke of Pope Benedict’s concerns within the context of the Our Lady’s prophecy, saying to those those gathered at mass:

“Our Holy Father, Benedict XVI, in the last chapter of his new book, described the spiritual stage of this world today, with great seriousness. He warned that “there is real danger in that which is invisible and is being hidden behind the visible moral deviations. Modern society at the moment is in the face of forming an anti-Christian credo; and opposing this credo is punished with social ex-communication. The fear of that mighty power of antichrist is completely natural. And what is necessary is the prayer of the whole Church to resist him.”

Father Ivan then said: “Brothers and sisters, all of you who are honoring the Blessed Virgin Mary, Queen of Peace: We are the witnesses of this drama of mankind. The Antichrist, with the help of his many alliances, truly wishes to create man in his own image. That is why he wishes to wipe off the image of God in man; to kill that gene that man has when he as a creature comes from the Creator. (“Man will act like his own creator”)

He wishes to define human nature anew. And he is declaring that what was once evil, now is something which is completely normal and acceptable. And all those who feel differently, they are forbidden. Then in the name of being politically correct and in the name of social tolerance, people represent and defend these evils, since otherwise they would be declared ‘conservative’ and they would be harmful for the advancement of society.”

Esteemed philosopher and friend of Pope Emeritus, Josef Pieper, believes that the spirit of the anti-Christ has arrived and he is greatly concerned. He writes: The rule of Antichristic humanism will require everyone, absolutely everyone, regardless of race, religion and social class to enter the wedding of the Antichrist. The rulers will demand the population accept modern humanism as a better brotherhood than Christ himself was able to realize. Professor Pieper says we are nearing the time of the Mark of the Beast as prophesied in chapter 13 in the book of revelations. He says that those who refuse to enter the wedding of the antichrist, those who refuse to receive the mark of the beast on the hand and forehead will be unable to buy or sell. 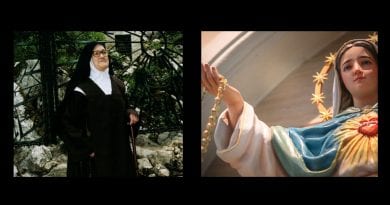 Throughout the years Our Lady, The Queen Peace, has “implored” all of us to be her apostles.  *See the messages

This is from the excellent web site Catholic Bridge   Many faithful Catholics believe Fr. Michel Rodrigue is the

Originally published in “Matters India’ By Cyriac Sebastian Kochi: Hundreds of people are flocking to a church in Kerala after a