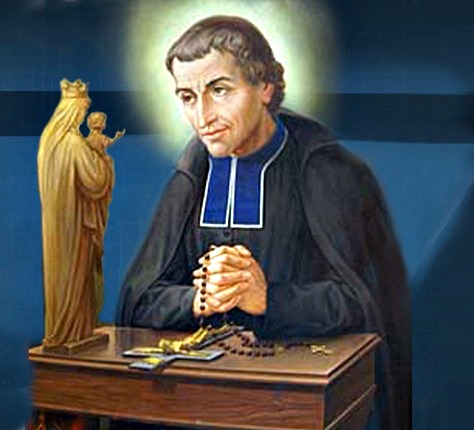 Today, April 28, 2022, is the feast day of one of the most devout and followers of the Virgin Mary ever in the history of Mariology, St Louis-Marie de Montfort. This great Marian saint is well known for his special prayer of entrustment to Our Mother Mary: Totus Tuus ego sum, which simply means I am all yours. We know that Pope St John Paul II chose this famous Montfortian motto as his own episcopal motto.

St Louis-Marie was born in Montfort, Brittany, France on January 31, 1673. As a young boy he nurtured a great love for both Jesus in the Blessed Eucharist as well as to His Mother the Blessed Virgin Mary, particularly by praying her Rosary. At his confirmation day he took the sweet name of Marie.

Furthermore, Montfort had a great heart for the poor. His biography tells us that already at school his loving concern for the needy led him to help the poor and the sick while he was supposed to enjoy his school holidays. After he felt his priesthood calling, at the age of 19, Louis-Marie left his hometown and trailed some 130 miles to Paris in order to start studying theology. At the age of 27, when he was ordained, he started his priestly ministry as a hospital chaplain. The hospital management greatly resented his orderly way of organizing the hospital. Thus, they sought every means to throw him out, as in fact they actually did.

At 32 years of age, the Lord showed him the gift he gave him for preaching. Hence, Fr Louis-Marie felt his inner call to dedicate his life in exercising this wonderful pastoral gift. His preaching was so powerful that large crowds used to come and hear his profound sermons. The main thrust of his preaching revolved around frequent communion and devotion to Mary.

In spite of much success, Fr Louise-Marie had to contend with persecution too, notably from the Jansenists. This heretical movement upheld that an absolute believe in Predestination, which erroneously suggested that salvation is simply for few people whereas the majority were considered lost and destined for eternal perdition.

In those days, France was largely infected by the Jansenist heresy, incorporating also bishops who did not let Fr Louis-Marie to preach in their dioceses. His story also tells us that the Jansenists managed to poison him in La Rochelle, but he survived, even though he kept suffering from ill health after this terrible assassination attempt.

During the time he was recovering from the effects of the poisoning Fr Louis-Marie wrote his Mariological masterpiece, True Devotion to the Blessed Virgin Mary. On this very acclaimed book he went on to prophesy that the devil would put it in secret from some time. In fact, this masterpiece was discovered some two centuries after St Louis-Marie de Montfort demise. An interesting fact about his life is the two religious Congregations which Fr Montfort instituted: the first one is the Daughters of Divine Wisdom, with the charism of caring for the sick in hospitals and the education of poor girls, and the Company of Mary, who are missionaries dedicated to the preaching and propagating devotion to Mary. Louis-Marie de Montfort was beatified by Pope Leo XIII in 1888 and officially canonized by Pope Pius XII on July 20, 1947.

In his letter to Mark the 50th anniversary of the canonization of St Louis-Marie Grignon de Montfort of 21 June 1997, St Pope John Paul II wrote: St Louis-Marie also calls on us to abandon ourselves entirely to Mary in order to welcome her presence in the very depth of our souls. “Mary becomes all things for the soul that wishes to serve Jesus Christ. She enlightens his mind with her pure faith. She deepens his heart with her humility. She enlarges and inflames his heart with her charity, makes it pure with her purity, makes it noble and great through her motherly care” (Secret of Mary, n. 57). Recourse to Mary leads one to give Jesus an ever greater place in one’s life; it is significant, for example, that Montfort invites the faithful to turn to Mary before communion: “Implore Mary to lend you her heart so that you may receive her Son with her dispositions” (True Devotion to Mary, n. 266) (no.4).

In this spirit of filial abandonment and trust let us start each and every day of our earthly life with the following most powerful and effective Act of Consecration to the Immaculate Heart of Mary given to us by St Louis-Marie de Montfort:

I, (Name), a faithless sinner –
renew and ratify today in thy hands,
O Immaculate Mother,
the vows of my Baptism;
I renounce forever Satan,
his pomps and works;
and I give myself entirely to Jesus Christ,
the Incarnate Wisdom,
to carry my cross after Him
all the days of my life,
and to be more faithful to Him
than I have ever been before.

In the presence of all the heavenly court
I choose thee this day,
for my Mother and Mistress.
I deliver and consecrate to thee,
as thy slave, my body and soul,
my goods, both interior and exterior,
and even the value of all my good actions,
past, present and future;
leaving to thee the entire
and full right of disposing of me,
and all that belongs to me, without exception,
according to thy good pleasure,
for the greater glory of God,
in time and in eternity.
Amen. 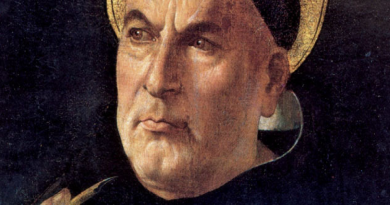 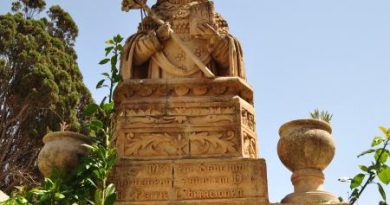 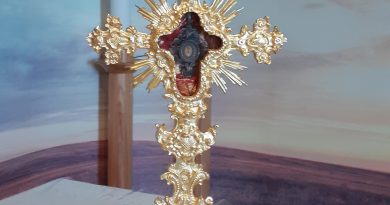 So much lessons from Christ’s Cross!

Virgin Mary Appears Next to Miracle Candle – Candle Lights up at time of consecration of the Host.

Originally Published in Aleteia.org Could this be the first Marian miracle on a cell phone? This is a story that