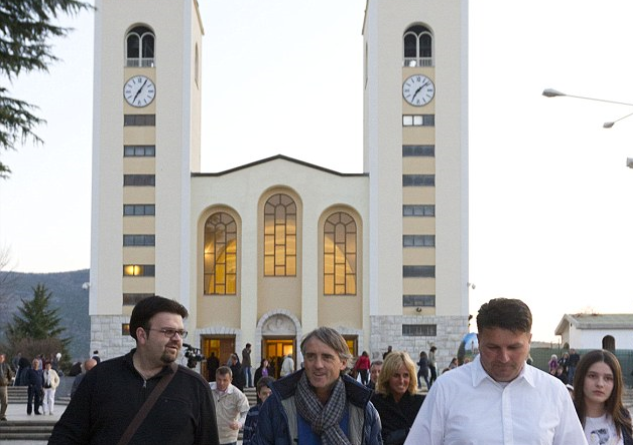 The European Championships of 2020, which have finished just three days ago, on Sunday 11 July 2021, brought about many blessings. One of them is the discovery that the Italian coach of the Italian football team is very attached to Our Lady of Medjugorje.

Mancini recounts that from his birth he was especially linked with Our Lady. He says: I have always been religious: I grew up in the parish, even in football. I believe in Jesus and in Our Lady. I was born on November 27, the day of the Virgin of the Miraculous Medal. Faith? It helps you in moments of difficulty, even to mature.

It is a known fact that the shy coach of the Azzurri is a convinced believer. Furthermore, it emerges crystal clear that Medjugorje exerts a powerful influence on him. Roberto Mancini nourishes a particular bond with the Virgin Mary as well as with the six visionaries to whom she appeared in the small and rugged town of Bosnia and Herzegovina for the first time on June 24, 1981, exactly 40 years ago.

When speaking to the Gazzetta dello Sport just over a year ago, Roberto said that his experience of faith is couched within his familial and professional life. When Diaco, the Gazzetta dello Sport journalist, asked him: Do you believe in the apparitions of Our Lady in Medjugorje? Mancini answered with his eyes sparkling with emotion and resolute in what he was saying: I believe. Yes I believe it. I went several times, I spoke with Vicka (Ivankovic, ed), with the other visionaries ...”. Then, Diaco asked him: Is it true that she appeared to you in a dream before you met her? And what does this dream tell you?

Mancini replied: Our parish priest in Genoa, the spiritual father of Sampdoria, told me about Medjugorje many years ago. He went in the period when it was almost impossible to go, so we’re talking about the 80s, ’82 -’83. It was the time when there were problems. I had never seen her, that is, I had never met her. However, before I went she appeared to me in a dream, I have not the slightest idea why or the meaning of all this. I don’t know, it was really a weird thing. Then I went and told her too. We have spoken to each other several times. I understand that there may be people who do not believe in this. I think that their thinking must be respected. Mine is a different position. I am for absolute freedom of thought. Faith has helped me in the slightly more difficult moments of my life. It helps me even now … When I go to Mass I have a better hour probably than the others. There were moments of difficulty and it helped me.

Hence, 9 years ago Mancini flew to Mostar and from there to Medjugorje for his first visit. His wife Federica and daughter Camilla traveled with the then coach of the City. Mancini met the visionary Vicka. Thus he recounts his experience:

As we entered the house Vicka welcomed us by hugging and greeting us with special affection. She talked to Camilla and Federica and then we sat in a corner and I explained in detail the feeling I had when I received her kiss in this dream that felt real. Vicka looked at me attentively and smiled as if she already knew everything and told me: “It is Our Lady who does everything, we open our hearts and She tells us what to do.” Then she began to pray over us, incessantly and with great intensity.

The surprising thing is that in that period Manchester City were eight points behind the historical rivals Manchester United coached by Sir Alex Ferguson. There were six days to finish the premier leauge. After the trip to Medjugorje, an unpredictable comeback began, culminating in the overtaking on the last day of the English Football title. The winning game that made Manchester City the Champions of the Premier League, carries the date of May 13, 2012, the feast of Our Lady of Fatima. For Paolo Brosio, a well known Italian journalist, it is certainly a sign of the help of the Virgin Mary. On his end, Mancini repeated several times: Faith has helped me a lot in life, not in work, because I believe that the Lord and Our Lady have much more important things to solve. However, I am convinced that whoever prays with faith receives help.  On the other hand, José Duque, the Portuguese manager of Manchester City from November 1, 2009 till May 30, 2013, also noticed the coincidence of the date of the decisive challenge which made him understand that Our Lady would help us. I am convinced that those who pray are helped by God.

In the interview with Diaco, Mancini recalled his elementary school teacher with great affection. Her name was Anna Maria Bevilacqua. I was a bit lively when I was little and therefore at school I sometimes created some problems during the lessons … I was not very attentive or maybe I didn’t study much. The teacher talked to my mom and dad: “The morning before coming in class, instead of milk, give him chamomile tea in the morning. This teacher really loved me, she was very fond of.

When Mancini was asked What is it that moves you?, Mancini replied: Children move me. Just think of a child that can lose his parents as a child. This is something that moves me a lot because I think it’s not fair. I think it’s not fair that a child can’t grow up with his or her parents. Roberto had already explained to Brosio: God has always been in my life. Because I was born and raised in my parish. I went to Mass every Sunday and was an altar boy, until I went to play at Bologna at the age of 14. And so I then moved away and today I also understood why.

In his interview, Roberto Mancini made the following beautiful reflection on Medjugorje. This place has something special. It speaks to your soul. If we all behaved like the people who live and work in Medjugorje, everything would be different. Many say that they do not have time to pray. I did too, but we must do as Our Lady tells us: start a little at a time and be constant, because then one realizes that one cannot do without it anymore. From the curiosity that brought me to Medjugorje for the first time, I moved on to a more conscious frequentation. I have met and talked to people who have taught me something. Confrontation with pain also makes you grow. I haven’t been going in a while, but I’ll be back soon.

The childhood parish that Mancini always mentions is that of San Sebastiano in Jesi. In 2014, when Don Roberto Vigo passed away, the priest who has supported him for over half a century, he rushed to the funeral, recalling how, right in the small field adjacent to the church, he too, who lived right in front of him, moved the first steps and kicked a ball like all the young people in the neighborhood. With the same enthusiasm and grateful spirit he recently participated in a mass in suffrage for Boskov, the legendary Sampdoria coach, celebrated by Don Mario Galli, the former Sampdoria chaplain, who was the first to speak to him about the Queen of Peace and the mariophanies of Medjugorje.

Roberto Mancini’s story powerfully echoes within me the message Our Lady gave to us on October 9, 1986, when she said:

Dear children! You know that I desire to lead you on the way of holiness, but I do not want to compel you to be saints by force. I desire that each of you by your own little self-denials help yourself and me so I can lead you from day to day closer to holiness. Therefore, dear children, I do not desire to force you to observe the messages. But rather this long time that I am with you is a sign that I love you immeasurably and what I desire of each individual is to become holy. Thank you for having responded to my call. 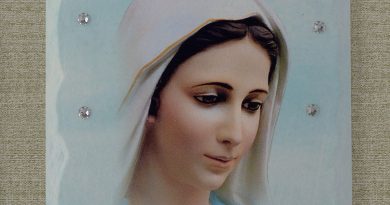 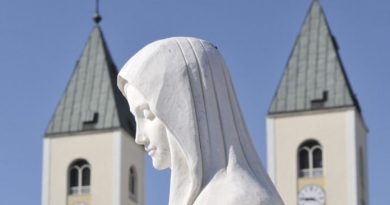