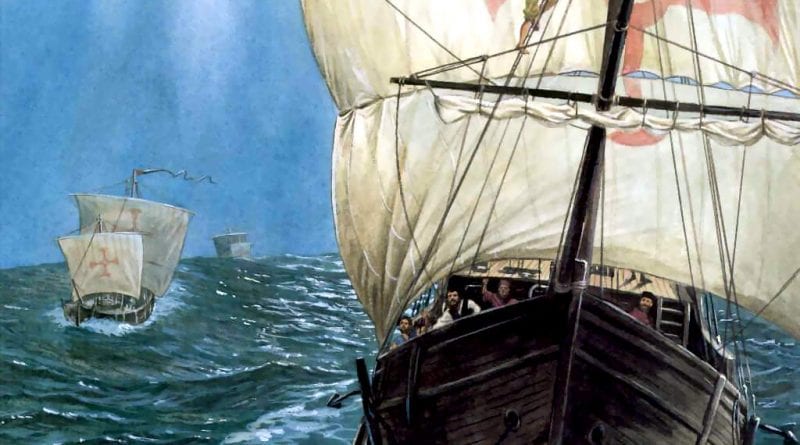 By Stephen Ryan Author of The Madonna Files

Many Catholics are familiar with “Our Lady of Guadalupe” and most know the story of the great miracle of Juan Diego’s cloak often called a”tilma”.

The tilma miraculously transformed into a “painted” image of the Virgin Mary right before the eyes of the astounded Catholic Bishop in Mexico. For those familiar with the story, it is  understood that the image was not “painted by human hands” but rather was supernaturally created by God.

This great miracle brings us to either an extraordinarily providential sign from the heavens or an impossible coincidence.  I like to think it is a great sign from God.

We all learned in elementary school the name of the ships that brought Christopher Columbus and his crew to the “New World”.   Columbus’ fleet was made up of  three ships called “Pinta”, Nina,  and the “Santa Maria”.  Again, we all know this, but how many of us contemplate on the literal translation of the boat names.

Let’s start with “Pinta”. The English translation of “Pinta” is “paint” or “painted”.   (Keep in mind the image of Our Lady of Guadalupe was “Painted” by God.)

The second ship was named “Nina” and  the English translation would be “young girl”,  certainly a virgin.  Most scholars believe that Mary was  a teenager when Christ was born and She was most certainly a virgin.  ** a commenter on this site just posted the following: “It is also interesting to note that Saint Juan Diego in the Nican Mopohua – the story in nahuatl of the apparitions of the Virgin of Guadalupe – refers to the apparition as “Señora mia, mi niña”, i.e. My lady, mi little girl. **  Incredible thanks for sharing !

So if we put all  the names of the boats together in a sentence  we see that Columbus’s fleet  of ships quite literally describes the great miracle and apparition of Our Lady of Guadalupe.  The miracle of the “Tilma” is best described as a  “Painted” (Pinta) young virgin (Nina) named “Santa Maria” (The Virgin Mary).

It is quite fascinating to think that Columbus’s fleet shipped off from Spain  to discover new worlds foretelling of the great miracle of Our Lady of Guadalupe which would lead to the conversion of millions of pagans to the Catholic faith.

More on the hidden meanings behind the miracle of Our Lady of Guadalupe.

Christopher Columbus, Our Lady of Guadalupe, Mexico abolishing slavery, the Alamo, black slavery, the American civil war, six hundred thousand dead “The Trail of Tears”, ethnic cleansing of American Indians – all these signature events in American history have roots that can be traced back to a little black statue that came to America on a boat named “Santa Maria”

When Columbus landed in the New World, he and his men first prayed the “Salve Regina.”  The “Salve Regina”, is the final prayer of the Rosary. The prayer explains how God gave Mary to mankind as the “Gate of Heaven”.

Columbus understood the best path to Heaven was venerating the heart of the Mother of Christ. Significantly, it is important to understand that Christopher Columbus did not only bring Christianity to the New World, but rather he brought a strand of Catholicism defined by a strong devotion to a dark skinned woman.

Soon after Christopher Columbus’s arrival to the New World, the apparition and miracle  of “Our Lady of Guadalupe” took place 1531. After appearing to native American Juan Diego,  the Virgin Mary left behind a miraculous image of herself and the image was a person of mixed skin color, a skin color chosen by God.

And in this painted image Our Lady of Guadalupe God was proclaiming to the world that we are all one people – black, white, brown – we are all God’s people. It is worth remembering that the Virgin Mary revealed herself to a peasant Indian.

Following the apparitions of the Virgin Mary in Mexico, as millions of Aztec Indians were converting to Catholicism, the Protestant Reformation in Europe was taking place. Millions of Europeans left the Catholic Church between 1532 and 1538 – ironically, to a large degree because of the Catholic Church’s excessive devotion to the Mother of Christ.   The Protestant Reformation was not only a rebellion against the authority of the Roman Pope but the Reformation was also about the Catholic Church’s excessive veneration of the Virgin Mary. Protestants parted ways with Catholics because devotions to the Blessed Mother were not only viewed as extreme but they were considered not scripturally sound.

To Protestants, the Virgin Mary’s role in Christianity was based on legends and dogmas that were simply invented by Popes and obscure Cardinals in Rome.   Protestant’s believe in “Sola Scriptura” – “Scripture alone” – that is, only the Holy Bible revealed God’s word. That the Pope would elevate the role of the Virgin Mother – willy-nilly – was, in the end, the real deal killer for Christians who broke away from the Catholic faith.  Protestants believe the role of Mary is insignificant in Christianity.

There is a stark contrast between the Catholic New World and the America that was settled by English Protestants. Right from the start, Franciscan Monks built schools, churches; provided medicine, and farmed side by side with the local native people. Catholic Mexico outlawed slavery and fought at the Alamo to enforce abolition laws and to free slaves.  The first Protestant settlers in America, on the other hand, quietly shunned the Virgin Mary. When Protestants and evangelicals were forced to confront the Virgin Mary, usually only at Christmas, she was sanitized and depicted as a white-faced Northern European. There was no place at the table, or the church, or in the homes for a dark-skinned Madonna in the puritan and white world of Southern evangelical Christians and New England Protestants  and this intransigent fact set the stage for the racial horrors that would challenge and define the United States for next two hundred years.

Most people who know the story of Our Lady of Guadalupe believe it mostly speaks to the rise of the mestizo people, the rise of Christianity and an end to pagan rituals and human sacrifice -nothing more – but the call for racial harmony is the crucial message and it was not heeded – at least not by all. What transpired north of the Rio Grande would be horror for Native Americans, African Americans, and the six-hundred thousand young men who died fighting over the right to own slaves.

The sad result of not heeding the Blessed Mother’s warning would be a nation defined by racism that would lead to epic repression and violence against people of color. Ignoring “Our Lady’s call for harmony among races was followed by  the enslavement of African blacks, the American Civil War, six hundred thousand dead, ethnic cleansing of the American Indians, the Trail of Tears, and the near extermination of a race.  The ugly truth is that American Christian Evangelical and Protestant leaders left the blood of Native Americans on the killing fields and kept the blood of Indians away from their veins while Spanish monks invited Indians into their churches.

North of the Rio Grande we have White Anglo Saxons free of the stain American Indian blood and in the South we have a mixed race, dark skinned people, who love a painted picture of a miraculous Catholic Virgin. A racially harmonious message had come down from heaven to remind the world that we are all one people and tragically that message was ignored by many Protestant Christians and secular leaders of the United States with devastating results.