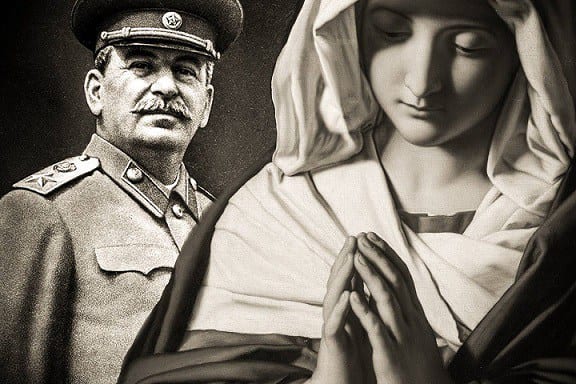 In June 1941, Germany attacked the Soviet Union with all available force, taking Stalin by surprise. That advance of the Third Reich, which failed, could change the fate of World War II. Russia actually found itself in a moment of great difficulty.

And at that juncture Stalin began to give orders rather “strange”, unexpected. The officers were ordered to return to the ancient Tsarist practice, according to which the troops were sent to the battle with a: ” Come on, with God! “. Moreover, the troops were assigned a good number of those chaplains who, of course, did not exist since the early days of Lenin. Other staggering measures followed, such as the order to reopen as many as 20,000 churches and, with particular solemnity, two of the most revered shrines by the people: the monastery of the Trinity of St. Sergius and the “Three Caves” in Kiev.

The regime had never allowed the post of Patriarch of Russia to be covered and here Pravda , for the first time, reported that Stalin had received an ecclesiastical delegation and (textual words from the official newspaper of the CPSU) «the Supreme Commander of the Armed and Head of the Government expressed his understanding of the proposal of the religious to elect a Patriarch and declared that no obstacle will be opposed by the government “.

THE ICON OF KAZAN

Even more disturbing for people accustomed to the relentless struggle against “superstitions”: in the Leningrad besieged by the Germans reappeared, from the warehouse where it was thrown together with many other sacred images, the venerated icon of the Mother of God of Kazan, protector of Russia and , under the shooting of the German artillery and the Lufwaffe, the authorities themselves organized a dedicated procession.

THE TRIP TO STALINGRADO

And it did not end there: the icon so dear to all believers was transported to Moscow, also under fire, and another procession was celebrated with the collaboration of the Atheist Party. But the astonishment reached its climax when Kazan’s Mother of God, with a long and tormented journey, reached another besieged city, a city that bore the name of the Russian leader and therefore had a very high symbolic value: Stalingrad.

These sensational turns are told by Vittorio Messori in Il Timone (July 2014) and reported in the new edition of “Ipotesi su Maria” (2016) , one of the best known books of the writer and Catholic historian.

Messori takes up the theses illustrated in turn by the Russian historian Edvard Radzinsky in “ Stalin: The First In-depth Biography Based on Explosive New Documents from Russia’s Secret Archives, Anchor, (1997) (pp 472-481) “, biography of the Russian dictator dated 1997.

THE LETTER FROM LEBANON

Radzinsky makes a surprising revelation. Stalin’s change of attitude had a precise motivation. And it happened for a revelation of the Virgin Mary.

Stalin was afraid of a “warning” arrived precisely from Our Lady, through the testimony of a Lebanese mystic. The dictator had presented the chief of staff of the Red Army, General Boris Shaposhnikov , with a letter from Lebanon. Letter that the dictator took very seriously, also because the disaster was at the door. The general, a war hero not to be taken lightly, explained that a venerated Lebanese Orthodox ascetic, such a father Elijah, was dismayed at the idea that the pagan Nazis could trample on the sacred soil of Mother Russia (which, even in the hands of the communists, remained the Third Rome), had spent three days and three nights in the crypt of his church, without drinking or eating or sleeping, kneeling and praying.

THE REQUESTS OF MADONNA

On the last day, the Mother of God appeared to him on a pillar of fire. She had said that in order to save Leningrad it was necessary that the Russian churches and monasteries be reopened , that the clergy in prison be freed and the icon of Our Lady of Kazan carried in procession to Leningrad, Moscow and Stalingrad. That icon, the most venerated of the Russias, had come from Constantinople to Kazan in the 13th century, but then it had been made to disappear from the invasions of the Tartars of Tamerlane. The memory had been lost until 1579, when a great fire had devastated the city. A little girl named Matrjona had then dreamed of the Virgin pointing out to her the place to dig. There he was actually found the icon, which from that moment was produced in amazing miracles.

THE CHOICE OF STALIN

We know that Stalin gave orders to do what was required in the letter, and even the agnostic historians know that since then, and until the end of the war, religious persecution was suspended (Il Giornale, 5 December 2015).

of Gelsomino del Guercio for Aleteia 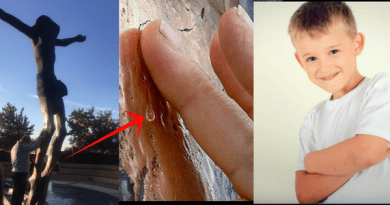 MEDJUGORJE: “THE LATENESS OF THE HOUR…WE HAVE ENTERED THE TIME OF THE TEN SECRETS”

MEDJUGORJE: THIS MYSTERIOUS RUSSIA PROPHECY IS UNFOLDING NOW IN UKRAINE -BE READY FOR WHAT IS COMING