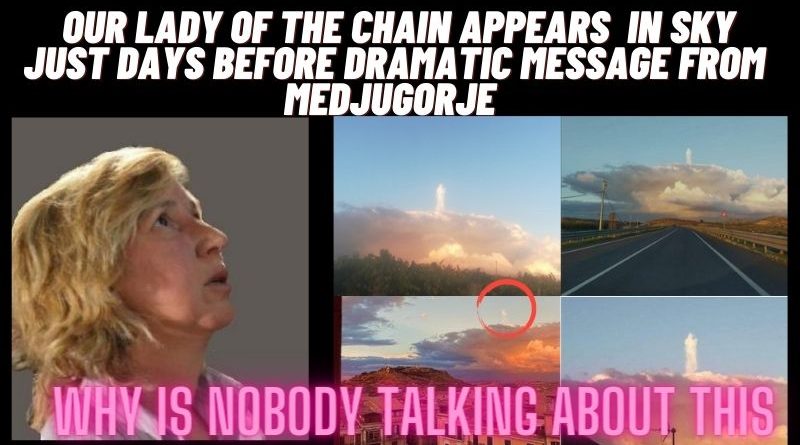 On October 9, 2021, in the sky above Palermo Sicily, a spectacular image appeared that witnesses say looks just like the Madonna della Catena, or “Our Lady the Chain.”

Our Lady of the Chain is venerated as the one that reminds us that God, through Mary, frees us from the slavery of sin.

Amazingly this image appeared above her shrine, just days before the Queen of Peace of Medjugorje made the subject of “Freedom”, and the chains that bind us, the major theme of her monthly message for the world given to Maria.

Our Lady said on October 25 : “God is love and freedom, therefore, little children, when they want to put you in chains and to control you, it is not from God. Because God loves and gives His peace to every creature.”

The meaning of this message led to intense discussions and debate across the globe among the religious and Medjugorje experts.

The photos were made public by Riccardo Caniatoa aNews Reporter from Italy. He

Writes “I received the photos from Giuseppe Cartella, a friend of mine whose life has been changed by Our Lady and now has a travel business taking Sicilian groups to Medjugorje.

When I opened the package I saw four images, each taken from different places and angles. To me there was no doubt that the maternal figure of Mary appears clearly in an alchemy of clouds.

In the package sent by the travel operator there was a note saying: “These photos were taken at four different angles on October 9 at sunset. Look at the cloud. By enlarging the image it looks like the Madonna of the Chain”.

Let us read the full message from Our Lady given to Maria on Ocober 25, 2021

“Dear children! Return to prayer because who prays is not afraid of the future; who prays is open to life and respects the life of others; who prays, little children, feels the freedom of the children of God and in joy of heart serves for the good for his brother. Because God is love and freedom, therefore, little children, when they want to put you in bonds and to use you, it is not from God. Because God loves and gives His peace to every creature; and that is why He sent me to you to help you to grow in holiness. Thank you for having responded to my call. ”

Our Lady of the Chain, Origins
Q: What is the historical origin of the devotion to Our Blessed Lady of the Chain?
A: The devotion to Our Lady, venerated under the title of Our Lady of the Chain, had its origin in Palermo, Sicily. At the end of the fourteenth Century the historian Mongitore, in his book Palermo Devoted to Mary, relates: “In the year 1392, while Martin I reigned over Sicily, three young men were condemned to die on the gallows. While these young men were being conducted under heavy guard to the square of the Marina, where the execution was to take place, the Blessed Virgin Mary came to their assistance, either to protect their innocence, or in answer to their fervent prayers.
“Suddenly, the skies darkened and a terrific storm broke out over the square. The people who had gathered to witness the execution fled for shelter. The guards and the prisoners found shelter in the Church of St. Mary of the Port. The storm raged all day, and the execution had to be postponed.”

“Precautions were taken that the prisoners might not escape. Extra chains were fastened on them and the doors of the Church were securely locked. That night, the guards that were on duty fell asleep and the three young condemned men found themselves at the foot of an Image of the Blessed Virgin Mary. They prayed fervently for deliverance. While they were praying, the chains mysteriously fell to the ground. The doors of the Church opened by themselves, and they heard these words coming from the Image of the Blessed Virgin: ‘Go, you are free, do not fear. The Divine Infant Whom I hold in my arms, has heard your prayers and has granted your freedom’.” The young men silently walked out of the Church.
The guards awakened from their sleep, not seeing their prisoners, sought them and, finally, caught up with them. The prisoners would have been chained again, had it not been for the people who interceded for them with the King. The King having heard what had happened, granted them their freedom, saying: The Blessed Virgin Mary has set them free, so will i.
The news of the miracle which occurred in the Church of St. Mary of the Port very soon reached every comer of Sicily and became known to the people all over Italy. Faithful from all parts of Sicily and Italy began their pilgrimages to the Holy Shrine to pay their homage to the miraculous image which, from then on, was given the title ‘Our Lady of the Chain’. The devotion to Our Blessed Lady of the Chain increased rapidly, as many were the miracles and favors which were obtained from God through the intercession of Our Lady of the Chain, at the Shrine dedicated to her honor.
“So dear was this devotion to the good people, that many of them, even though they had to leave their native shores to lend their strength and give their talents to this rising democracy, left everything behind them but their love for the Blessed Mother of Chain. And of all of the many immigrants, it was the people of Cefalu, Sicily, who brought with them their devotion to Baltimore, MD.”
“We hope and pray that many more, with the help of this story and novena prayer, will join in this rare and beautiful devotion which has brought spiritual, emotional and physical freedom to many. Devotion to our Lady of the Chain can be especially helpful for those struggling with the ‘chains’ of addiction. Whatever chains may bind us, freedom granted by our Lord Jesus can be possible through the intercession of His Mother, venerated under the title of “Our Lady of the Chain.”
This information was provided by St. Jude Shrine in Baltimore, Maryland 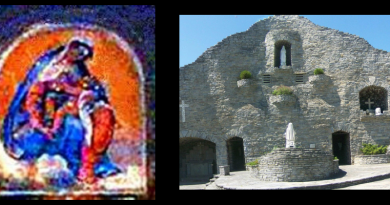 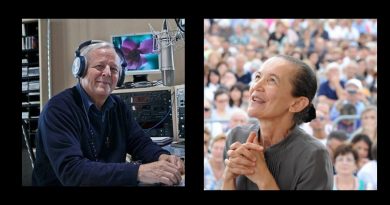 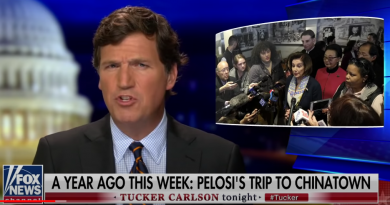 In October of 1981, the Queen of peace at Medjugorje, answered a question from the  visionaries:  “What will become of

Something called “pandemic dreams” is being blamed for keeping stressed out Americans up at night during the coronavirus outbreak. These

The Akathist Hymn to St Joseph the Bethroted

Dear children! As a mother, I desire to be of help to you. With my motherly love, I desire to

Medjugorje: THE UPHEAVAL: The Tipping Point has arrived: “I know the exact date.”